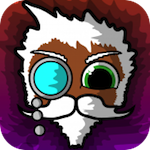 We’re into playing whatever you guys think is cool, so we decided to give Towelfight 2 (Free) a shot after an awesome commenter (and Eli) suggested we do it. And you know what? It’s an awesome game. It’s sorta like an ultra light rogue-like mixed with a dual-stick shooter. In the game, you play as monocled-man swept up in a battle between gods. He’s warped to a strange world with rabid animals and is tasked with getting out. Unfortunately, this world looks a lot like an old-school 2D dungeon and there’s a lot of different ways to go and to approach things.

We’re calling it “ultra light" because Towelfight isn’t all that punishing. If you die, you go back to a warp spot, which is basically a checkpoint that makes your dude throw up. (Don’t ask.) BUT, the rest of the game has some rogue-like sensibilities like, say, a huge grid-based map to explore and a pretty deep weapon system.

It’s a little pricey as far as App Store games go, so if you’d like to give it a good long look (and watch us fail over and over again) check out the below: