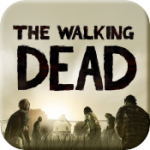 Last Sunday AMC kicked off the second half of The Walking Dead season 3 with the episode “The Suicide King" which picked things up where we left off on the obligatory pre-mid-season-break-cliffhanger in Woodbury. I’m still not entirely sure how I feel about the episode, as it definitely seems like the show goes in cycles of around four episodes of build up that are just OK with two episodes following that are really awesome. (As a former Lost fan, I can’t believe I’m faulting a show for too much build up.) Regardless, I totally recommend checking the show out. If you’re like me, and have pulled the proverbial plug years ago, the first two seasons are on Netflix with the third available on iTunes.

It turns out that if you own an iOS device (which is presumably why you’re reading TouchArcade), you’re in an awesome place as a Walking Dead fan as you can experience everything the universe has to offer right on your iPhone or iPad from the comfort of your own couch. Additionally, once you do experience all these things, you can ascend to the position of “that guy who has strong opinions" in regards to which is better- The comics, the show, or the video games. To kick things off, it’d make sense to start by reading The Walking Dead comics. It’s a free download, and you can check out the very first issue before diving into a variety of purchasing options to snag the rest of the issues. Whole volumes are available for $10, or individual issues for a buck.

From there, it probably makes sense to move on to The Walking Dead: Assault ($2.99) which is a squad-based survival game which actually feels way closer to the comics books than even the actual show or other video game. Per our review, gameplay can be a little frustrating at times but otherwise Assault is a decent little tie in.

My personal favorite, however, is Telltale’s Walking Dead: The Game (Free). Like most Telltale games, you’d be hard pressed to find someone who managed to play through it (on any platform) without some kind of weird technical glitch, but Walking Dead is video game story telling taken to a whole new level. With its own spin on The Walking Dead universe, each player will have a unique experience through the adventure. The first episode is free, and everyone with a capable device should play it. If you need something further to push you over the edge, check out our glowing review.

So, with that all out of the way, I’m curious what the Walking Dead fans among us thing is the best of the three pillars of The Walking Dead universe? (Well, I suppose four if you count Assault.) Don’t get me wrong, I like the show, and the comics, but I think the Telltale game is the best thing to come out of Walking Dead. Conversely, I have friends who can make compelling arguments that the comics are the best and everything else is secondary.

…Is there anyone out there who thinks the show is the best?