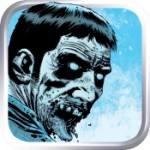 The Walking Dead is starting to seem like quite the media empire, given its ever-growing pile of retellings. The Telltale game, the AMC series, the novelization, the original comic series—all unique takes on the same story of the end of the world and the horrible things we do to each other afterwards.

The Walking Dead: Assault ($2.99) takes the property in a new direction. It isn’t about the end of the world, it isn’t about the horror of humanity stretched to its limits. It’s about obliterating zombies and living to tell the tale.

Arguably, that’s not quite as interesting.

It’s certainly slick as all heck, with a gorgeous isometric take on the comic book’s style. Its a joy to peer down at Rick and company as they wander familiar landscapes, sweeping and clearing the walkers away. 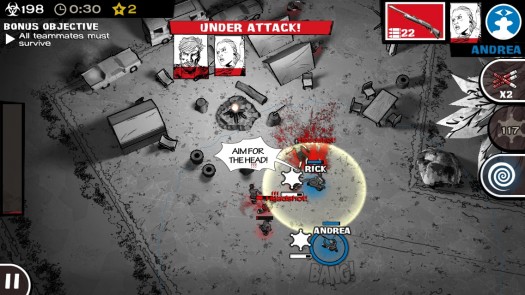 That’s how the game plays: you take a small squad of up to four survivors through a scenario, and you travel down every hall or pathway killing zombies until no more stand. It’s a comfortable sort of zombie scenario—if you’re careful enough, nothing will ever pop up behind you or surprise you. This might take something away from the horror of the game; thankfully it does little to hurt its strategic challenge.

Each of the survivors has his or her own place in the team. Rick, for example, has quite a bit of health and can move quite quickly. His police training lets him focus for brief periods to take nothing but headshots, and his leadership skills help his other team mates fire more accurately. Among the rest of the survivors, these special skills tend to loosely relate to their strengths in the comics. Not all are created equally, though. Once you unlock enough characters, you’ll need to mix and match to find a squad you’re comfortable with.

Weapons make the decision harder. Each survivor has a signature weapon, with guns of all firing rates and ranges. Aside from Rick, everyone’s a compromise of some sort. A character with a low-range shotgun is going to require significantly more babysitting than one with a decent rifle; folks that only carry melee weapons are pretty much zombie meat. 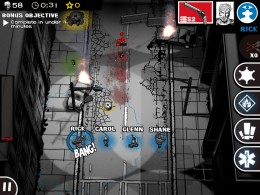 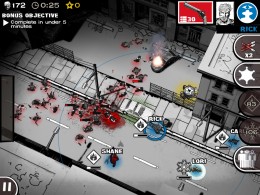 In fact, melee is a bit of a mess across the board, a major frustration of The Walking Dead: Assault. With guns, your characters will shoot at anything in range, and that range is denoted by a helpful selection circle. Ammo is scarce, however, and must be carefully preserved, so you’ll find yourself in melee plenty. If the survivors could move themselves even a few short steps to engage the nearest walker, that wouldn’t be a problem. But having to manually shuffle each one around is a nightmare.

The controls do their best to make this painless, but they don’t quite pull it off. You double-tap to move the selected character, or tap and hold to move your whole squad (this can also be swapped if it helps). You can tap survivors to select them, or cycle through them with a button. For everything but melee, this is more than sufficient. In melee, any character in the lead will be swarmed, so you need to be ever-so careful not to let anyone step ahead or lag behind. It would be difficult to make controls so fluid that this wasn’t at all frustrating.

Otherwise the hunt is a good one. You travel down each street and alley scoping out any walkers, carefully dealing with them ( trying not too make too much noise lest you attract the herd), and tracking down any extras. Sometimes you’ll find a friendly survivor to protect. Usually you’re hunting for badly-needed supplies, which in this game translate to your ability to recruit new survivors and upgrade your stats. If you fall behind, well, you can pick some up in the IAP store.

The Walking Dead: Assault’s play environment is impressive. The cities and streets are properly abandoned, the woods are appropriately spooky, and even the distractions you can use against the zombies are fitting. The music is creepy and tense. It doesn’t happen often enough, but when you’re surrounded by too many foes and your squad is starting to fall and the music rises just right, well, the horror finds its way back into the game.

Most of the time, though, The Walking Dead: Assault isn’t much more than a decent tie-in, one that won’t make any waves. Earning achievements gets you art from the books and trivia about the story, the survivors are all pleasantly familiar, and if you’re a big fan of the property, it’s an entertaining world to wander around in. It just misses the things that make The Walking Dead great, the things that so thoroughly populate Telltale’s adventure game. It’s a bit of a let down, but hey—at least it’s not the end of the world.