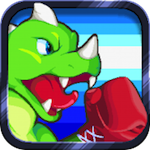 Rampage is a classic series of games about gigantic monsters who bash cities into ruins. Roar Rampage ($0.99) is a new iPhone game about a lone gigantic monster who bashes cities to a fine cement-y pulp, too. No doubt, there’s a lot of similarities between these games at the top-level, which kinda makes Roar Rampage seem a little gross at first glance. But, if you dig a little deeper, you’ll discover a Monster Vs. City game that plays with the act of ruining a city in such a neat way that you forgive it’s titling and appearance.

Specifically, in Roar Rampage, you are the Gigantic Monster’s arm. You guide it with a finger and swing it into buildings and helicopters, causing havoc and breakage. It’s an interesting mechanic that’s coupled with a physics engine capable of sending rubble flying in the direction you swung and into other objects.

Also, let’s not forget that your monster, a dinosaur, is wearing punching gloves like a boss.

Eli and I gave Roar Rampage a quick look the other afternoon and walked away pretty impressed despite our initial reservations. Maybe you will, too. Check it out: