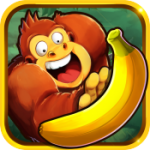 Earlier this week, Bradley and I sat down with Banana Kong (Free), a new endless runner from FDG Entertainment that has been getting some fairly positive remarks from folks in our forums and elsewhere across the web. While Brad was initially turned off by Banana Kong based simply on the name alone, thinking it was trying to ride the coattails of Nintendo’s Donkey Kong, I think he actually found himself being kind of taken with Banana Kong‘s charming visual style and personality. I also helpfully reminded him that King Kong predates Donkey Kong by about a half century, so there’s that.

Still, a platformer with a big ape for a main character where the main goal is to collect bananas does feel suspiciously like its treading in Donkey Kong Country territory, but Banana Kong has managed to stand out on its own for me. My favorite part about the game is the ability to transport yourself into different environments, like the bouncy tree tops above the jungle or the creepy underground area found in an abandoned mineshaft entrance. Banana Kong probably won’t revolutionize the auto-runner platforming genre or anything, but it’s got a ton of character and variety, and it’s also a lot of fun.