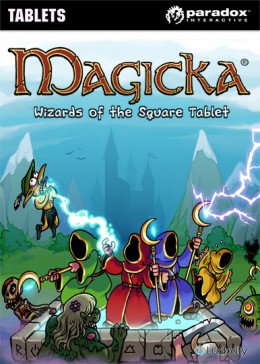 Magicka proper is Paradox Interactive’s most downloaded title to date. If you haven’t heard of it, you can check out the web site, which also conveniently features about a million different places you can download it from ranging from Steam to services I didn’t even know existed. It’s a multiplayer co-op RPG of sorts, and in the not too distant future, will be making the jump to mobile devices in the form of Magicka: Wizards of the Square Tablet.

Where Magicka “proper" has a bit more serious of an art style and a 3D isometric view, Wizards of the Square Tablet mixes thing up a bit with a almost Castle Crashers-like cartoony vibe and gameplay that could be summed up as Battleheart with multiplayer and friendly fire. Tapping on the screen moves your dude around, and tapping on enemies is how you cast spells. Much like Battleheart, things get hectic quickly as enemies invade from both sides of the screen.

In the world of Magicka, you cast spells by combining elements. For instance, tapping fire, then earth, and your dude hurls a flaming boulder wherever you tap. Life heals you or an ally, and combining life with lightning can jolt someone back to life. The system of spells is just ridiculously complex, especially once you figure out that you can combine up to any four of the seven elements which makes for a ton of possibilities. Discovering new spells is super cool as you’re mashing elements, and in the brief time I had with the game I was already discovering new tricks just through trial and error in mixing and matching elements.

You can play the game single player, but it truly shines in the four player cooperative mode. I mentioned how hectic the game is when playing by yourself, but when you add three more people into the mix, it’s crazy- Especially so when you consider that most (if not all) of the spells in game have a different blast radius, and everything you cast hits both enemies and your teammates. The mayhem that ensues is hilarious, as the more powerful spells seem to have massive effective radiuses, so while you’re spewing your volley of fire and brimstone across half the screen, you’re also probably hitting half your team as well.

Someone almost always is dead, or dying, and playing quickly turns into a battle of not getting killed by your teammates almost as much (if not more so) than not getting killed by enemy monsters. It’s not just all silly team kills though, as Magicka actually has a ton of depth via a rock, paper, scissors system of spell damage and debuffs. For instance, an enemy (or player) who is wet will take more damage from electrical spells. So, a viable tactic would be to have one player focusing on spells that involve the water element to get everything wet while the rest of the party goes to town electrocuting everything with lightning spells. 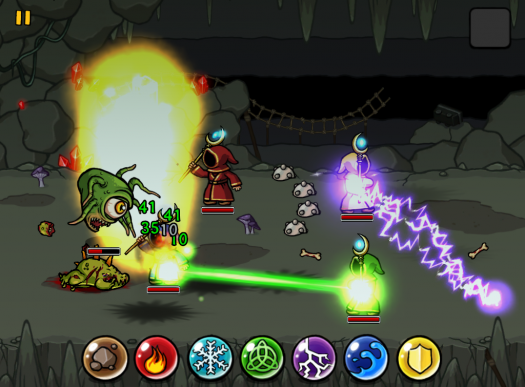 The catch, however, once again is that while you’re spraying water everywhere chances are your character will also be wet, and being electrified as well. Cleverly, you “dry" yourself by casting a quick fire spell targeting your wizard. Levels range from typical side scrolling and kill everything arrangements, and there’s also boss fights which each seem to have their own unique gimmick to deal with. There’s an in-game shop filled with equipment to unlock, each which have various hilarious side effects such as a staff that really soups up your spells, but since it’s a spent nuclear fuel rod, you take constant unavoidable damage while holding it.

Magicka: Wizards of the Square Tablet is “coming soon," and I’m super excited to sit around and play it with my friends. The multiplayer experience almost reminded me of Space Team (Free) in a way, as while success involves teamwork, gameplay will inevitably just devolve into ridiculous bouts of laughter as everyone yells at everyone else regarding which spells to use, who needs heals, and the almost guaranteed moment your party decides to just ignore enemies and kill each other.

If you want to see what the game looks like in motion, check out the following video that Paradox captured for us. Without proper context it’s a little difficult to tell what’s going on as without all the subsequent shouting Magicka is just an explosion of numbers and spell effects. We’ll do a proper TA Plays of the game as soon as we can get our hands on a more finished version of it.