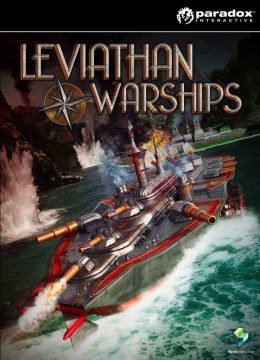 The other game we saw here at the Paradox Con was Leviathan Warships, and it’s really a toss up as to whether I’m more excited for this or Magicka. Where Magicka takes a more silly and casual approach to things, Leviathan Warships is strategy on top of strategy, and totally built around cross-platform asynchronous multiplayer. The dream Paradox is selling is a strategy game that’s entirely platform agnostic and seamless between whatever device you’re playing it on. Naval war battles you can play on your PC, then just walk away and pick up exactly where you left off on your iPad. It’s been done to some extent before in different games, but this whole “play the same game everywhere" thing so many developers are working towards is really exciting to me.

I think the best way to describe the way Leviathan Warships works is by looking at a game like tabletop Warhammer. You start by building your fleet (of course you can use pre-built ones, but, come on) and there are multiple point values allowed depending on whether you’re building for a small, medium, or large battle. There are multiple types of ships, each with their own point values, and each of those ships have mounting points to add offensive and defensive capabilities. These guns (or defensive measures) also all have their own point values. This immediately caused the part of my brain that makes Warhammer so appealing to start going crazy.

Once you’ve got your fleet, you’re thrown into multiplayer battles with up to four people. The game is played ten seconds at a time, with everyone choosing where their ships will move, what direction they’ll (eventually) face, and which weapons or abilities will fire. Everyone locks in their selections, the battle progresses ten seconds, and you do it again. It’s awesome how it works out, as it’s totally turn based but it almost feels real time with the way all the ships interact with each other at once. I could imagine games potentially taking forever if someone is being slow about locking in their moves, but, like other similar asynchronous titles, you can run multiple games at once so there’s always some action taking place.

The strategy of these battles is just awesome once you begin to get a grasp of how the game works. For instance, one particular strategy (of a nearly infinite pool) could involve investing most of your fleet points on just creating a long range massive battleship with loads of strong artillery. The catch is, while anything that’s in firing range of that ship will undoubtedly be annihilated, that ship isn’t capable of seeing where it needs to shoot by itself because its artillery is so long range. 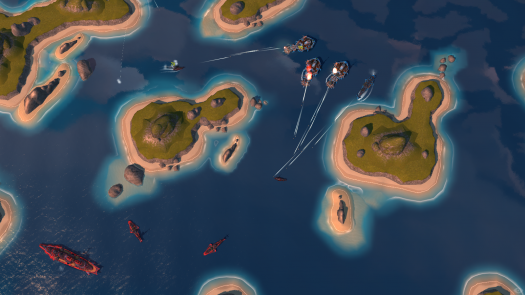 That’s where scout ships come in, so you’d have a few very fast moving and cheap (point-wise) ships that you use to locate the enemy ships to then target them with your giant warship that’s securely hidden behind an island in the corner of the map. It’s not that easy though, as the animation of the incoming artillery barrage makes it apparent the vague direction where that shot is coming from. For this strategy to work, you’d need to kill the enemy ships before they find your gunship, as the drawback of ultra-long range weaponry is that it has a massive minimum firing distance. The same gun that in an ideal situation might be able to take down a ship in a few shots is rendered completely ineffective if someone is able to charge up inside of whatever the naval equivalent of “melee range" would be.

Of course there’s a counter for this as well, as you could save a few ships behind that could act as interceptors with close range weaponry, but do you have enough points for that? This is what makes Warhammer so amazing to me in that yeah, you can have some ridiculously powerful unit, but everything has drawbacks. If this jargon is going over your head, think of it this way: The Death Star can destroy planets, but one exposed exhaust port is all it takes…

The direction your ships are facing is also important as guns are very specifically mounted on each side of ships. This once again invokes the whole army building aspect of the game, as you could load a ship in a way that it could have both long range and short range weaponry on all sides, or load one side up for a massive canon barrage before turning your ship to its other side for short range attacks.

These are just my impressions after playing the game for maybe fifteen minutes. I haven’t even scratched the surface of what’s possible, and it seems like a title with mechanics like Leviathan Warships could have a really long tail of developer support as they could add new ship types, maps, and weapon mechanics for eternity. Leviathan Warships is coming soon, and I can’t wait to spend more time with it.

Like Magicka, Paradox captured some footage of the iPad version of Leviathan Wars for us. It’s without context, but it’s a little easier to tell what’s going on. Hold on to your butts, as we’re going to TA Plays Leviathan Warships proper as soon as we can get a build of it.