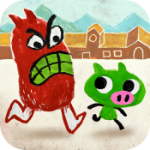 The App Store, being an entirely digital space and with Apple playing the gatekeeper, can be a tricky place. We’ve seen some sticky situations in the past when publishing deals expire and there’s no easy way to transfer the rights to someone else so that a game can continue being sold. Sometimes that means a game simply gets pulled, never to be heard from again. More frequently, at least in my experience, is that a new publisher or the developer themselves will go ahead and put the game out again, but since there’s no way for the App Store to recognize who bought the game already under the previous publisher your only option as a customer is to buy it again to ensure you have the newest version.

So really, the only good option in that scenario is to re-release the game for free for a brief initial period, and let your previous customers know that they should replace their current version with the new one while it’s temporarily free. That’s exactly the scenario we’ve currently got with Gesundheit! ($3.99), an award-winning puzzle game developed by Revolutionary Concepts in conjunction with the fantastic artist Matt Hammill. Gesundheit! originally launched in July of 2011 and was published by Konami. At some point it disappeared, but today Revolutionary Concepts has re-released the game under their own name, and is offering it for free for a very limited time.

The happy side effect here (well, for the gamers anyway) is that even if you didn’t have the previous version of Gesundheit! you can still take advantage of the freebie and grab it right now. And holy moly should you ever grab it. Not only is the art style and music incredibly charming, but Gesundheit! is also a clever puzzler that will tax your brain. It’s also got a lot of snot, which is cool. You should give our original 5 star review a look if you need some more details, and you can always check out our forums for more impressions and discussion.

Whatever the case, everyone should definitely download and at least try Gesundheit! while it’s temporarily free, and owners of the previous versions should grab this newly released one which will be the one that’s maintained and updated going forward into the future.