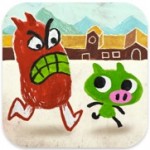 There’s no way to avoid this: Gesundheit! ($3.99) is gross. It’s a game about sneezing, and snot features heavily. But it’s not a game defined by disgust. The gross-out factor stuck with me for the first level or two, and after that I only noticed how whimsical and well-formed it is.

You play a wee green pig whose allergies keep him apart from his fellows. But when monsters invade, it turns out his biggest weakness is also his biggest strength. The monsters just love to eat the one weapon at his disposal: his snot. Blech.

To save his city and his piggy friends, he’ll need to use that advantage to lure the monsters into traps without getting eaten himself. If the pig is seen by the monsters they’ll come straight for him, but they can always be distracted with a big, juicy sneeze. This means piggy needs to engage in guerrilla warfare, hiding behind buildings and bushes and leading monsters to their deaths. I love these stealth elements. When you know you’ll have to leave the shadows, you’ll have to strategize – make sure there’s a snot-ball in just the right place to lure the monsters away, and then dart behind a building before they’re done with it. 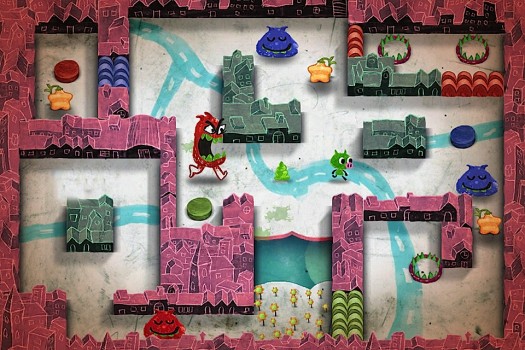 The puzzles are varied, and most can be approached in different ways. Throughout the game, you’ll encounter several environmental features that you can use to get more out of your sneezes. Certain flowers give you super-powered snot balls, and grasses let you use your sneezes like a grappling hook. Sneezing across a teleporter has interesting results. And some of the monsters provide special challenges, requiring you to quietly rethink your strategy. All the puzzles are thoughtful affairs, though they occasionally require you to think on your feet as a monster chases you down.

Complicating the matter is the presence of three StarFruit in each level. The stars are crushed if monsters run over them, and you can destroy them with your snot ball. You can only collect them before all the monsters have been lured to their deaths, so they increase the challenge by quite a bit. You’ll need to collect them all if you want to master the Game Center achievements, and you need to earn a certain number in each main area to progress to the next. This balances out the fact that you can skip levels freely, a decision that should make this game much friendlier for the younger crowd.

The controls are fantastic and simple. You move around by tapping where you want piggy to go. To sneeze, you pull back like a slingshot and aim. The game gives you an aim guide to work with, so you’ll never be fighting the controls. I ran into a few pathing issues while walking long distances, but they were never more than tiny frustrations.

The hand-drawn art is beautiful in action, and the music is lovely, happy stuff. The details show a great deal of care — shadows move with the device’s gyroscope, animations are adorable across the board, even the menu and maps have been created with obvious love. The interface isn’t quite as good. You can’t move between worlds without taking a slow walk across the map, and you can’t quit out of a level without skipping it. There’s no detriment to doing so, but it’s still not ideal. I also had a couple achievements unlock at strange times, but that might have just been a one-off bug. There’s already a patch in the works to add OpenFeint support and fix a few frustrations, so Gesundheit! should be an even smoother experience soon.

With 40 levels to play, each with StarFruit to collect and ranks to earn, you’ll get hours of fun out of Gesundheit!. It’s a real charmer, and our forum users agree. Grab the HD if you can — this game deserves the big screen — but don’t miss it either way. It may not be completely revolutionary, but it’s the sort of experience that shows off the wonderful things people can create for this platform as the tech, and the studios, mature.