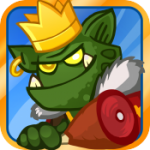 The whole roguelike thing can seem kind of intense—the permadeath, particularly. It’s all struggle and strife and the near-inevitable fall. It’s hard to relax when you know each and every move could be your last, after all. Dungelot ($0.99) makes the whole formula much simpler.

It’s the mythical casual roguelike, in fact. Yes, you will die. You will die often. On the way to those deaths, though, things will be relatively relaxed. Combat is simple. Inventory management is simple. Exploration is a matter of flipping tiles and seeing what’s underneath. It’s almost perfect for the world of casual mobile games. 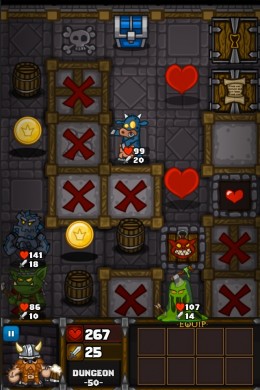 Apparently that little problem is due to be fixed. Retina resolutions should also be coming back—yes, “back." Is there any other subgenre as plagued with post-update bugs as this?

Otherwise, check it out: we have ourselves a pick-up-and-play roguelike. Each dungeon level has 30 tiles. One’s an exit, and 29 are a mystery. Under a tile you might find an enemy, a treasure chest, a trap or something special. Usually you’ll find nothing at all, and after a certain point you’ll learn to prefer that fate.

Combat is a numbers game. You have an attack number and a pool of health, and your enemies have much smaller attack numbers and pools of health. You tap on them until one of you runs out. Straightforward, no? Each enemy type has some special feature—a chance at a double-attack, perhaps, or health regeneration—and you have a handful of your own depending on your class.

Classes are the long-term hook. There are four at the moment, the paladin, the vampire, the brewer and the assassin. Each has three unique passive skills. You start with the paladin and unlock the rest as you reach new depths of the dungeon, and you can level up their skills with the coins you find—find, not buy.

In the shorter term, your progression is pretty much entirely based on luck. As you dig your way down, you’ll find swords and hearts strewn around to add to your attack and health. You’ll find gear to help you on your way. And you’ll find spells, so many spells. You can cast ’em, or you can cannibalize them for their delicious hearts. 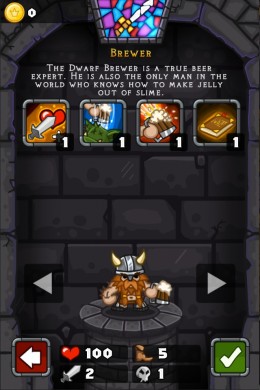 These are the kinds of choices that define your time in Dungelot. They aren’t as fraught as the choices you make in most roguelikes—you’ll always know about how much longer you’ll live, for instance. The biggest decision is whether to keep going: you can flee a level as soon as you find its key, but should you? There could be treasure. There could be a tasty bonus when you clear out the mobs. Or you could whittle away your health for no good reason.

There’s plenty to keep the game going, even while every trip down ends the same way: with a long, slow process of health draining away to your death. There are new monsters to find at new depths. There are special doors that open for special reasons. There are extra rooms to hunt through. You can find your old corpses for fun and profit. It’s the process of exploring, improving, unlocking and upgrading that will keep you coming back.

That’s the beauty of Dungelot. It’s not the most complex roguelike, or the cleverest. It is, however, just right for a casual dungeon delve on a mobile device. There’s just enough meat to keep it compelling, and not so much complexity that you’ll ever have trouble recalling your strategy when you come back from a break. It’s, well, casual. A casual roguelike—how about that?