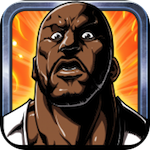 How Shaq got into another brawler isn’t much of a surprise. Cold, hard business fueled its creation: his likeness holder One Spear Entertainment wanted a game and Hiptic delivered on that. The neat part of the creation story is that Shaq had some actual creative input on the project.

Earlier this week, we talked with Hiptic’s Long Vo about the game’s creation and Shaq’s influence on the project. He pretty much walked us through development from A to Z, and told us what Shaq supplied where.

“So, we were approached by One Spear Entertainment, the owners of the Shaq Digital License," Vo tells us via e-mail. “They saw our previous game Go Ninja and wanted to make a Shaq game with our engine."

In what Vo calls an ironic twist, Hiptic ended up scrapping that plan and making a new engine for ShaqDown. It wanted to add in a dab of fighting game flavor into the mix. This was something Shaq’s team was cool with. 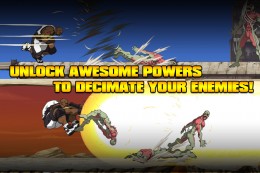 “In terms of the concept, while working with Shaq’s team, they pretty much let us pitch them whatever we wanted to. Shaq himself told us to just have fun with it and not be too worried about things. He was very supportive of letting us have creative freedom."

As the project took shape, Hiptic sent videos of the game in progress to Shaq. He and his team made remakes along the way. Vo says Shaq was “super cool about everything," but he did have some guidelines.

“I think the only directives we were given was that it couldn’t be bloody and should have the violence level equivalent of say, the TV cartoon version of the Teenage Mutant Ninja Turtles," Vo explains.

ShaqDown isn’t Shaq’s first rodeo. Dude has appeared and starred in a couple of games, though none as memorable as Shaq Fu (1994), a bad brawler with an absurd premise that saw Shaq fighting inter-dimensional villains. It’s a bit of a cult classic, wretched hit boxes and all. 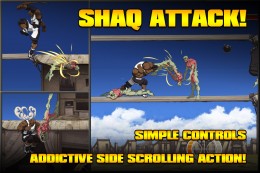 Hiptic was aware of Shaq Fu and knew that any video game with Shaq in it that came after would have to follow in its footsteps since, you know, it was so impressionably over-the-top. In the coolest way possible, the silliness of that game informed this one.

“We knew of Shaq Fu‘s infamous history, so we were very aware that that any game involving Shaq really couldn’t be taken too seriously. So, we decided conceptually, we wanted it to be overly cheesy but play it straight, you know like a bad B movie," Vo says.

“ShaqDown isn’t meant to be a serious fighting game like Shaq Fu, but it is one that emulates the rhythm and cadence of a fighting game. We treated Shaq like a character out of Street Fighter or Fist of the North Star, a larger than life hero type and just took it from there."

Outside of some over-arching creative guidelines, Shaq also handled his digital character’s barks and added some of his own flavor. 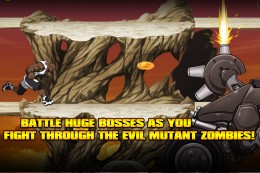 “We had a recording session with him in which we wrote a script to have him make all kinds of Capcom-esque fighting yells using basketball terminology," Vo tells us. “We were super surprised at the level of professionalism he showed during the recording session. He did at least three takes of each line — with different deliveries — and gave us a lot of spontaneous ad-lib as well."

A lot of games featuring celebrities feel like the cold and hard business decisions that they ultimately are. But despite its problems, ShaqDown manages to feel honest to video games and Shaq’s personality. Maybe he wasn’t as hands-on as we hoped he would have been, but the approach worked.

ShaqDown might not be the best game ever, but it’s a superb example of a game that could only happen on the App Store. We’ve got a review here and a video here, if you want to see the game in action.