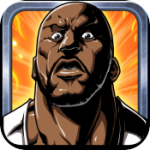 There is no way to sugarcoat this: ShaqDown (Free) is not a great game. It is, at best, a merely serviceable game ideal only for anyone ravenously massaging their hands mad scientist-style with anticipation. This also probably is going to really, really bum out Shaq who is himself a hugely outspoken Apple enthusiast.

Sorry Shaq. But what follows is true.

So what went wrong? There is far too much emphasis and reliance on gimmick. ShaqDown starts off in Yemen, which is seemingly ground zero of the zombie apocalypse. Mankind underestimated the zombies, and wound up being enslaved by them. Among the wreckage, though, “[there] was a man that stood up to mutant zombies all by himself. To some he is known as the ‘Dunkman.’ We know him as ‘The Justice Bringer.’” The opening cinematic laying this all out comic-book style is charming, but by the time you’ve hit “buy” in the Apple store, you know all this. Its element of surprise and kitsch has all but worn off. 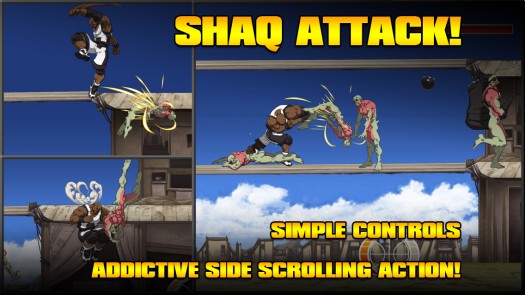 Also, as it was unrolling on my iPhone 4S, I couldn’t help but think, “Oh, okay: Resident Evil 5 meets Punch Quest meets Dikembe Mutombo’s 4 1/2 Weeks to Save the World… with zombies.”

Then again, though, lots of games attempt to cash in or piggyback off popular trends. It makes good business sense. I think what happened with ShaqDown, though, is that it was an unfortunate victim of timing. But even by itself, the game is just exceedingly generic. And slightly confusing in its controls at first.

For example, after dispensing with the opening, you’re set loose on Yemen, which is a seemingly endless track of three sets of parallel sidewalks. For you see, ShaqDown is essentially an endless runner. With zombies. 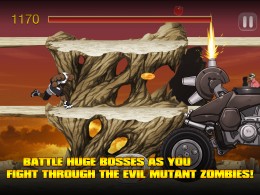 You have the ability to “uppercut” by jumping up from one track to another and also to chuck a basketball as a “free throw,” and the ability to throw a projectile in an endless runner is cool, but it’s largely untapped. It only comes in handy against the boss battles (it’s the only way to hurt enemies like Ricardo Montalbomb) and also as a defensive measure against zombies that are in the process of turning into hulking mega zombies. The huge zombies you can’t hurt, and will stop you in your tracks instantly if you collide.

But there’s no way of knowing any of this except through trial and error. There’s a control graphic that pops up when you first start, but it just shows you how tapping in different regions will let you do different moves — but not what they’re for. I got halfway through the game — there are three levels — before I realized you don’t actually have to uppercut the lower zombies. You can just commit moving violation after moving violation on them and just run right through them, which takes a lot of the tension out of the game.

The more Shaqra, or points, you earn, the more upgrades or specials you can buy. Some of them you can literally only buy with dollars, like unlocking specials such as the Lee Kemp assist attack, but nearly everything else you can invest points in to unlock new “suits.” The “suits” are really more difficulties, which means you’ll be seeing these three levels an awful lot. Or, there’s also survival mode, in case you wish to go into overtime with ShaqDown.

Ultimately, though, for all its tapdancing there just isn’t anything interesting going on here. The concept is solid but the execution is so humdrum. You zig and zag through the levels until you hit the boss, which you pelt with the rock. Then you do it again two more times and then you’re done — unless you wish to continue on in other modes or on harder difficulties.

And sooner or later, the zombies will get you. They haven’t freaking died yet, already, have they?