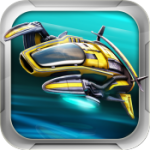 Let’s clear the air: clean lines and futuristic stylings aside, Pixelbite Games‘ Repulze ($0.99) shares little in common with Wipeout. One is an iOS racer that costs less than a dollar, the other is one of Sony’s most popular and enduring racing franchises. That’s not to discount Repulze, though — it’s from the same team that developed the excellent Reckless Racing 2 [$1.99]. Whereas RR2 included drifting mechanics and a dynamic difficulty system, Repulze is comparatively stripped down: it only does one thing, but it does it really well.

The game’s most obvious feature is its visual design. The tracks and hovercraft all fit squarely in sci-fi’s artistic wheelhouse, but the vibrant colors and sharp lines look nice on a big iPad screen. One of my favorite hovercraft, for example, is the Yugana SB-23, the one that looks most like a podracer from The Phantom Menace. I like the way it handles, of course, but I also like the the way its hydraulics pulse up and down as I bank left and right. Each vehicle is full of small visual touches that set it apart from the rest, and Pixelbite’s attention to detail permeates the entire game. Even the menus look nice. 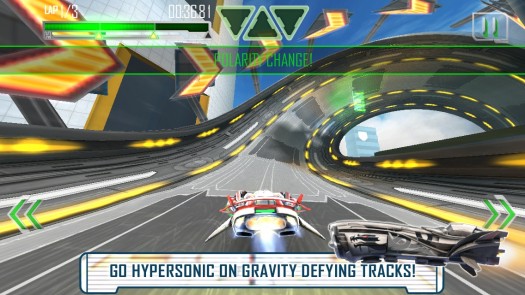 Repulze isn’t a racing game as much as it is a time-trial game — there are no other vehicles competing for first place against you. There’s an online leaderboard and a few time-based challenges, but the game is mostly about matching each track with the appropriate vehicle and mastering its twists and turns, learning where to bank to the outside and where to take the inside lap to transition into a straightaway or a loop. You might want a heavier, Buffalo-class racer for the curvy Shore Line, but the smaller, speedier Nousagi RS-55 will allow you to squeeze through the tight tunnels of Neon Hill more effectively.

While there’s nothing flashy about the tracks — you won’t be shot out of a cannon or racing through a volcano, Mario Kart-style — each one feels engaging and well-plotted. Crazy, hairpin curves are used judiciously, and none of the tracks feel impossible to navigate. On the contrary, each curve feels fine-tuned to compliment the controls, creating a nice sense of tension and drama: just as your hovercraft feels like it’s going to careen into a retaining wall, the curve flattens out, giving you a short respite to plot your next maneuver.

Speaking of controls, Repulze features the standard touch and tilt varieties, with sensitivity options for both. I could never get the tilt controls tuned to my liking, even for best-handling vehicles, but the touch controls work well. Virtual left and right buttons govern your lateral movement, and your hovercraft of choice will accelerate automatically. Pixelbite were smart to streamline all but the most crucial player inputs: your hands never get in the way of the screen, which keeps the control scheme simple and the action fast-paced. 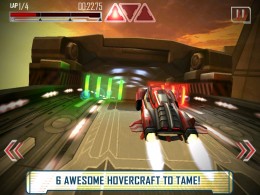 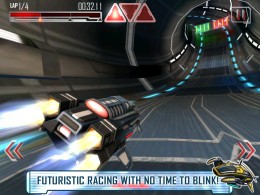 Each track is littered with red and green, slalom-like gates. Passing through three in a row will give you a short burst of speed; passing through the wrong gate will sap your momentum, which not only hurts your time, but breaks any rhythm you might have had. It’s not a particularly complex mechanic, but Repulze is just fast enough that it creates a nice risk — having your vehicle stall out is disheartening, but chaining boosts together is empowering and fun.

Learning the layout of each track and using your speed boosts effectively (which, in my experience, is as often as possible) will be crucial if you hope to complete each track’s challenges. Across the board, Repulze‘s tracks offer the right mix of straightforward navigation and using the game’s polarity mechanic to boost your speed at opportune times.

There are no in-app purchases, but Repulze does come with a standard suite of unlockables and a level-up system. At the beginning of the game, vehicles, color schemes, and tracks are gated off and must be unlocked by gaining experience and completing challenges. Players will accrue experience points every time they race, so even the worst players will unlock new content at a steady clip. This type of design is somewhat annoying, but Repulze makes it unobtrusive enough that it never really hampers progress.

Given its speed and structure,  Repulze reminds me most of Trackmania — short, digestible races designed to trigger the just-one-more-try mechanisms in your brain. With friends around, it actually makes for a great impromptu pass-and-play local multiplayer game — the tracks are short enough to keep everyone involved while fostering friendly competition.

Repulze is a pared-down, focused game, with very few bells, whistles, or accoutrements to jazz up the basic racing.  This sparseness is bolstered by Repulze‘s great sense of speed and track design — the core experience is fun enough to support the repetitive nature of the time-trial. Repulze is refreshing in its straightforwardness and execution, preferring to be excellent at one simple thing — visually and mechanically — than mediocre at several.