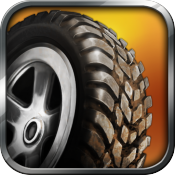 When Reckless Racing [$0.99 / HD] hit the scene back in October 2010, we praised it for the incredible top-down racing experience it offered. Now, the folks at Pixelbite Games are back again with Reckless Racing 2 [$4.99], the long awaited sequel to this arcade racer. Improving on nearly every facet of its predecessor, Reckless Racing 2 is hands-down one of the top arcade racers I’ve ever played and is well worth the price of admission.

From a presentation standpoint, Reckless Racing 2 makes some significant changes in comparison to its predecessor. Gone are the country themes present in the music and characters (although the latter still remains somewhat in the avatars and names of your AI opponents). In its place is a stylized, clean motif complete with fast-paced music reminiscent of 80s action movies (think Top Gun). Some folks may argue Reckless Racing 2 loses some of the ‘charm’ found in the original, but I think this is a great move that moves towards a more universal appeal. 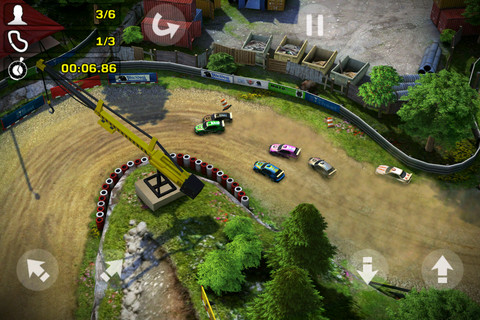 Another area that receives an overhaul in Reckless Racing 2 is its core gameplay formula. A comprehensive career mode takes center stage in this sequel, complete with 18 different cars to purchase and a plethora of upgrades available for each individual vehicle. The career mode is actually pretty standard – players race through a variety of cups containing several courses. Money is awarded after each race, with a larger monetary bonus depending on your final position at the end of the cup.

Rather than forcing players to complete cups in a sequential fashion, Reckless Racing 2 employs a Performance Index (P.I.) restriction. The higher a P.I. rating is on a car, the ‘better’ it is stats-wise. Modify your car with new parts and its P.I. rating increases. Cups have a P.I. range that your car must fit into in order to play. While it is possible to upgrade your car so it can participate in progressively harder cups, eventually its P.I. max will be reached and you’ll have to buy a new car with a higher range in order to advance to more difficulty cups. It’s a disappointing restriction for folks that become attached to cars, but I thought it was an excellent way to balance upgrades and difficulty while nudging players towards trying new vehicles. 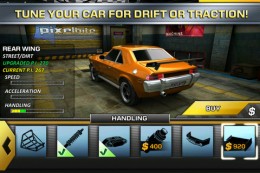 In addition to career mode, Reckless Racing 2 features an excellent challenge mode that supplies the player with a pre-determined car and track. Race against the A.I., place third or higher, and you advance to the next challenge. I found it a great distraction from career, as it allows you to quickly race while still having goals to work towards. Rounding out the modes are single race and wifi-enabled multiplayer. While online multiplayer was pretty fun, the lobby system was a bit rough around the edges (lots of players holding up games from actually starting). An auto-join with P.I. balancing would have been nice, as well as some improvement to the ‘ready’ system.

Racing mechanics also receive substantial changes in Reckless Racing 2, exchanging the ‘floaty’ and hectic feel of the original for a driving system that imbues much more control to the player. This is also reflective in the physics system which feels more suited towards a system requiring actual driving technique. The controls work well enough within this system, but not all control schemes are equal in this sequel. The new dynamic difficulty system, which raises and lowers the overall difficulty based on performance, is another addition that moves the game towards a semblance of realism (you can turn this off if it doesn’t work for you). In some ways, you can argue that these changes make Reckless Racing 2 a bit less, well, reckless. Despite this step away from its predecessor, I think the changes have created a game with more depth and challenge than the original. The upgrade system, for instance, allows you to customize your car to suit your driving style, somewhat preserving the original Reckless Racing style of play.

One of the areas Reckless Racing excelled in was its incredibly detailed visuals. Reckless Racing 2 ups the ante with an improved graphics system that just looks pretty damn amazing. Tracks are meticulously detailed and even effects like the dirt kicking up from your wheels on the off-road portions of the track are well done. Maneuvering my car around a curve with a giant gorge at the bottom or driving along an oceanfront watching the beautiful water effects are some of the nicest graphics I’ve seen on my iPhone 4S. Add in the fact that the game runs fast and smooth (at least on the latest hardware generation), and Reckless Racing 2 would give any game a run for its money in the visual department.

I’ve got to give kudos to Pixelbite – it’s pretty rare for a developer to take a chance and mix up the elements of a successful game in its sequel. However, in the case of Reckless Racing 2, that risk has paid off tremendously. The comprehensive career mode, wealth of maps, and tweaks to the arcade racing formula has made this game more enjoyable in the long term. Add in the amazing visuals and music, and there’s not much to dislike here. Folks have sounded off in our forums in regards to the significant changes to the core gameplay. Personally, if these changes result in an incredibly fun to play game, then what more can you ask for?