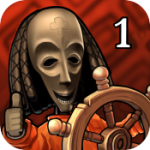 Skygoblin’s The Journey Down ($4.99) is a classic point and click adventure with a certain visual similarity to Grim Fandango, due in part to the way that many of the characters’ faces are modeled on African tribal masks, and a setting and mythology that owes as much to African diasporic culture as Grim Fandango owes to Latin American traditions.

Shoring up this impression is the way that the game opens with jazz and a thug who looks a bit like a chibi version of Baron Samedi – pity he’s one of the bad guys. I’ve always wanted to play a game where the protagonist was a Guédé.

The game’s actual protagonist, Bwana, comes from a long line of blundering adventure-game protagonists: Roger Wilco, Guybrush Threepwood, Sam & Max, and Liz Allaire, among others. Despite this, it took me a little while to become comfortable with the antics of Bwana and his brother, Kito.

In the gaming culture we have, a game where most of the characters are neither white nor some “stand-in" for Caucasian (pale-skinned elves, for example), is automatically significant in racial terms. At first, Bwana and Kito’s cheerful and careless ignorance was uncomfortably reminiscent of a Stepin Fetchit routine, as they are surprised that the power company cut them off over a mere four grand in unpaid bills. 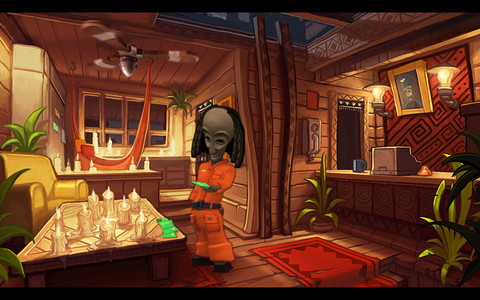 The reference to the old “lazy and ignorant" stereotype, and the fact that Bwana and Kito speak with a distinctive Caribbean accent, seem like the setup for a series of stale Rastafarian stoner jokes. Thankfully, as the game progresses, the characters grow beyond the stereotypes. The truth about Bwana and his brother is that they have lived by clinging to the literal and metaphorical edge of society, and are being not-so-slowly “pushed off." Thus their journey to the fabled Underland is both an escape from desperation and (potentially) a cultural allegory.

Technically, the game is well-put-together, with a very convenient swipe-to-show-hotspots mechanic and low overhead: it ran well on my old 4th gen Touch, and better on my new Mini. The art is original and fresh, and the reggae-jazz soundtrack is superior.

The puzzles are of middling difficulty and they all make sense, but are run-of-the mill fare overall, with one exception that I won’t spoil here. The voice acting is good, and many characters have optional dialogue branches that provide tantalizing clues to the nature and mythology of the world. Unlike, for example, Telltale’s The Walking Dead (Free), dialogue isn’t used to make key decisions with lasting consequences.

Like The Walking Dead, The Journey Down is serial, and this game is part one of four. Seriality and a black protagonist are just about the only common points between The Journey Down and The Walking Dead, and that’s not a bad thing. The combination of lighthearted play and serious themes in this game fits with its world and it’s own Bwana-like story: a free retro-styled version of the first chapter (PC only) attracted enough positive attention to drive the commercial development of the series.

I’m looking forward to the forthcoming chapters of the series, but my ultimate judgment of the series will depend on how Skygoblin handles the larger themes in the world and the continued development of the characters, especially Lina, a confident and intellectual woman who is clearly central to the plot, but who spends this game waiting for Bwana and Kito to get their act together.