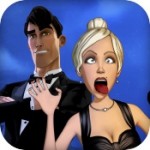 If Hollywood Monsters ($5.99) feels like a bit of a throwback to yesteryear’s adventure gaming heyday, well, that’s because it is. I mention the following not to bog you down with the game’s lineage, but to help you better understand the context with which it truly exists: Hollywood Monsters, freshly out for the iPad 2 and iPhone 4 and both platforms more recent iterations, came out in 2011 on PC as The Next Big Thing, which itself was a sequel to a somewhat obscure 1997 PC adventure game called Hollywood Monsters. The reason why this sequel bares the same name as its predecessor? My guess is it’s the same reason that it’s coming to the iPad, etc. all this time later: Nobody really played or remembered the original.

You don’t need to have any prior experience or knowledge of the games’ series because it’s instantly recognizable: It’s an adventure game in the more modern sense of the genre term, where you control multiple protagonists and don’t need to worry extensively about scooping up anything not bolted down “just in case.” 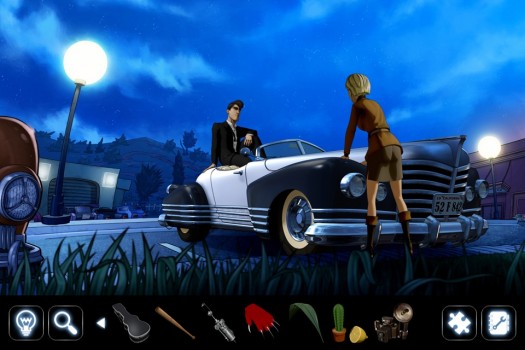 You play as Dan Murray and Liz Allaire, a pair of journalists assigned to cover a monsters’ ball, where all the Hollywood monsters, literally, are partying. However, it seems the party may actually be a cover for something else more sinister, or at least Liz starts to think so, when she spots one of the monsters climbing into an out-of-the-way mansion window and rifling around for… something.

Dan couldn’t care less, but he is forced to get off his keester when Liz finds herself kidnapped and wrapped up in the conspiracy you spend the better part of the game trying to uncover and unravel.

The plot is charming enough, and the game’s attempts at humor are admirable, though sometimes tries a bit too hard. I found myself both tickled and also annoyed when I realized the way to solve an early puzzle (skip this sentence to avoid a spoiler, duh) is not by concocting a seductive costume but by getting a robot drunk so it’ll have beer goggles and therefore grant Liz access to restricted areas of the compound.

Humor in games is always hit-or-miss, and while nothing will ever usurp Monkey Island’s throne in that department in this genre, Hollywood Monsters at least is a solid enough adventure-game experience to make those missed attempts at humor worth enduring: The game’s graphics are gorgeous, the soundtrack extremely vibrant and bursting with trills to accent moments both big and small, and the sheer amount of art generated is nothing short of commendable.

Then again, this wasn’t a game designed to be an iOS game experience in the first place — so of course all this work was done beforehand. It’s in the transition to the tablet and smaller screen, though, that some of the game’s biggest snags come to bear: Several times in my play-through, Hollywood Monsters froze or crashed without any warning. Fortunately, the game has a resilient auto-save feature that has your back anytime you enter a new room, but until it’s patched and fixed, a good rule of measure is to expect at least one crash per every hour of play.

These are not issues that mar the Hollywood Monster experience, but they certainly detract from it. Otherwise, this is a rather rock-solid and fun adventure game well worth sinking the handful of hours it will take to fully explore and enjoy everything this point-and-clicker has to offer.