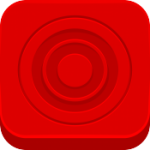 Hundreds ($2.99) could almost get away without an explanation. Here’s how the first level plays: you put your finger down on a circle. It starts growing, and a number counts up. When it hits 100, you win. You will never need a tutorial—anyone can learn to play.

Audaciously simple, no? Of course, Adam Saltsman and Greg Wohlwend are both old hat at making amazing things from simple beginnings. Canabalt, anyone? Puzzlejuice? Don’t go thinking Hundreds is just any old thing. The pair, along with composer Scott Morgan and developer Eric Johnson, have teased out every possible bit of complex fun one can have counting circles up to 100. For a hundred levels and beyond, Hundreds lives up to its pedigree.

The game never lets its players grow complacent. You master counting up with one circle, then more. You learn that if you’re pressing on one circle when it hits anything else on screen, you’ll fail. You then find variations—circles that need to be pressed in pairs, circles that shrink when you release them, spikes that kill your circles and ice-crystals that freeze them. There is never a time in those hundred levels that Hundreds feels low on ideas. 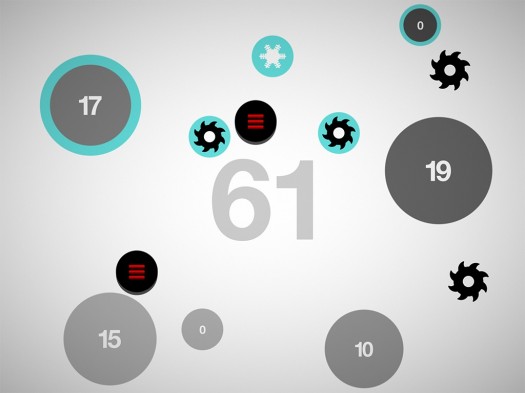 In fact, the game rarely plays the same for long at all. Some levels require incredibly precise and quick timing. Others will have you holding your breath until the exact moment you can tap one circle or another. My favorites are the cerebral challenges, the ones where the whole trick is just to figure out how on earth you’ll turn the available pieces into a full hundred. There’s something for everyone, and the game is generous about letting you move forward without mastering every step of the way—just in case the parts that are fun for me are agonizing for you.

I don’t want to get into too many specifics—discovering what’s in store next is a big part of the fun—but certain levels still have me shaking my head. How, pray tell, am I supposed to do what’s needed of me in Level 100? I can see how it’s meant to work, but actually making it happen…? You’ll need a steadier touch than mine.

I’ve temporarily moved on to the game’s other challenge: its ciphers. Every so often, after you complete a handful of levels, the game spits out a string of gibberish. Once you find those tucked away for safekeeping you can start decoding them. Do you know how to handle a simple substitution cipher? That’s a start, but you’re nearly inevitably going to need help. Read up, or visit our discussion thread for handy (and occasionally spoiler-filled) hints. 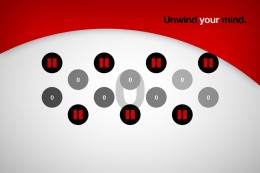 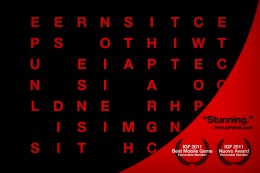 The ciphers are an odd addition, one that doesn’t fit quite cleanly with the rest of the game. There is a game-related reason to solve them (aside from earning the associated Game Center achievements) but messing about with codes doesn’t evoke quite the same feeling as tapping on circles. Both challenges take careful consideration, but in very different directions.

Is this a problem? Not particularly. Without the ciphers, Hundreds is a complete experience. It has 100 finely-crafted curated levels, and an endless mode that lets you play around with all the game’s elements in new and exciting combinations. There is no need to pay any mind to the ciphers at all.

With them, one could argue that the game is a more well-rounded puzzle experience. You have your twitch puzzles, your slow, thoughtful puzzles, and puzzles complicated enough that you’ll need pen and paper at the ready. If they didn’t feel like parts of two utterly distinct games, that argument might be an easier sell. A more likely rationale is that the ciphers give people reasons to discuss Hundreds, a game that wouldn’t normally foster much collaborative problem solving.

It’s awfully hard to be cynical about this game, though. It provides a thoroughly engaging experience—visually, aurally and mechanically. The reds, greys and blacks may not be marketing gold, but they’re striking. The soundtrack is excellent. And above all else, Hundreds is fun to play. It’s filled with levels that are truly satisfying to compete. The ciphers, well, they add to that engagement at first, and let it down a bit in the long run. It’s a good swing, and not much of a miss.

I’m not much for predicting the future, but since our first glimpse of Hundreds I’ve had pretty high hopes. Now that I’ve had a chance to play it through, I can say with more confidence that this game will be on everyone’s lips—whether it’s as a hidden gem or a standout hit is all that remains to be seen. Let’s hope for the latter. A world with gorgeous, complex puzzle games like this at the forefront is a world I’d be happy to live in.