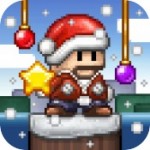 iOS’s fantastic little 2D Minecraft-alike (or Terraria-alike if you will), Junk Jack ($0.99), has just received a huge update for the holidays. You might remember that we really enjoyed Junk Jack when it released just over a year ago, but noted some areas in need of improvement, and mentioned at the end of our review that we hoped developer Pixbits would keep expanding their game through updates. Well, after 9 major updates, including an awesome Universal iPad update, I’d say that they’ve definitely come through.

And Pixbits doesn’t typically skimp on content in their updates either, and this latest is no exception. Being as this update is holiday themed, the majority of the new content is focused on winter and Christmas stuff. The whole environment is more winter-y now, with snow covering the ground and trees. There’s a new block type made of ice, and you can now throw snowballs that you collect in the world. 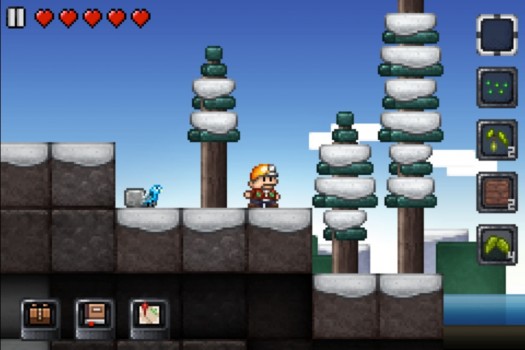 There’s some new winter mobs too, like penguins and a polar bears, and new ice-based weapons that can freeze mobs. Tons of new craftable and discoverable Christmas-themed decorations have been added if you want to add flair to your world, including the very cool ability to craft wrapping paper that will make a block look like a present. If you venture into the underground world of Junk Jack, you can search out a rare placeable Christmas tree as well as an assortment of other decorations. 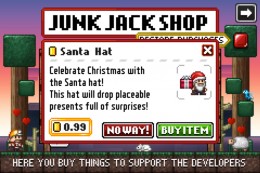 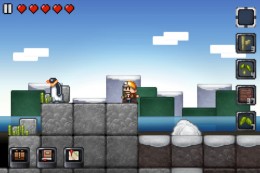 Also, if you feel like throwing some more dollars at Pixbits, 4 new Christmas-themed IAP costumes have been added, including Santa, a reindeer, a snowman and a Frost Ninja. I don’t remember what ninjas have to do with Christmas but I’m just going to go with it. There’s a few non-holiday goodies in this update too, like 10 new achievements, a new brown bear mob, and a new Bear Claw weapon.

Oh, and it wouldn’t be a Junk Jack update without a mile-long list of tweaks and bug fixes. You can check out this full list of new additions and fixes for the nitty gritty, if you want. We’re still waiting for some iPhone 5 screen love, which may come in the form of a new game, but Junk Jack still remains as fun as ever even with black borders so be sure to check out this latest update.