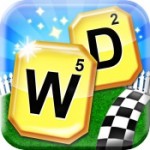 In my apparent unintentional quest to provide a splash of snooty culture to everywhere I contribute, what came to mind for me while playing Word Derby ($0.99), Chillingo’s newest addition to the word-game oeuvre (nope, that isn’t the snooty part of the sentence), is the inherent unfairness of competitive word games explored in the Broadway musical ‘The 25th Annual Putnam Spelling Bee‘ song “Pandemonium” (yup, that’s it).

The gist of the song is that spelling against your rivals or friends relies on the luck of the draw: You might get “elephant” and I’ll get “tuberculosis” (a word I actually drew in the fourth grade, that I got eliminated from the spelling bee with). Many iOS word games attempt to even the playing field by giving everyone the same letters to take a spelling machete to, and there haven’t been many new wrinkles added to it since. Word Derby is a little overzealous in its attempts to jazz things up, but more of the ideas work than misfire here, meaning it merits a look — particularly if you’re a fan of Words With Friends ($4.99) or Scramble With Friends (Free).

How this tarnishes both Words With Friends and Scramble’s crowns somewhat is in its execution: You can play with four people total (instead of just one other) and there is a greater emphasis on spelling a higher-scoring word instead of a bunch of words. 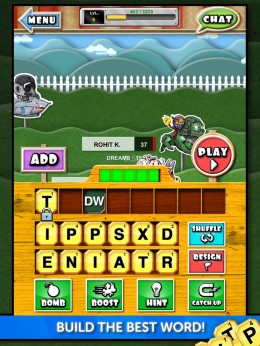 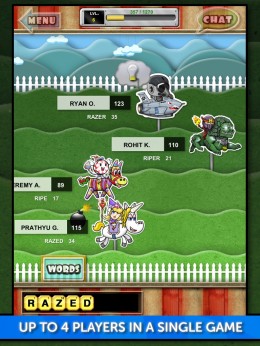 The time component is extremely key here: The quicker you spell your word, the better effect it’ll have on your score. Not with a multiplier, just with additional points. See, your score translates into how far along the track you and your horse get to move. So, it’s entirely possible you can wind up with a higher score for the word “BOX” if you spelled it faster than your opponent who spelled “BUXOM.” Vocabulary alone won’t save you — speed counts.

Bear in mind, this is all happening asynchronously. You go, then your opponents go, then you go, etc. Whoever pulls down 200 points first wins, and that can take a long, long time if your friends are dragging their heels.

So, there’s a lot of strategy at play here. As in WWF, there are power-ups to deploy if you so wish. Using the in-game currency, tickets (not betting stubs), you can do things like remove the lock from the first letter, swipe a speed boost even if you didn’t earn one, and also just flat-out cheat and be given a menu of the best possible words to spell from your deck of letters.

But the tickets are where some of Word Derby’s toothaches come in. You can earn more to buy different characters or bonuses, like having certain special powers for a specific period of time (usually a couple of seconds). I understand the temptation to not have a game start feeling like Monopoly, where one player is so clearly winning and everyone else is just eating their hats, but it starts to make a game of skill feel like a game of chance with some skill involved.

Also, there’s entirely too much going on with the tickets altogether. I played many, many games of Word Derby but had my ticket usage docked because I stupidly bet 200 on myself to win in my first group game against three random other players. Because that game hasn’t finished, those bets are tied up. Yeah, I could buy more tickets, but I have better things to spend my money on than virtual tickets in a virtual horse-racing word game.

On the flipside, I do appreciate that you can’t bet on games against your friends — so, no taking advantage of grandma’s senility for your own creepy gains, imaginary reader.

Ultimately, Word Derby has a lot of moving parts to it. Some move more fluidly than other, but the old girl’s got plenty of legs and horsepower in it before being overtaken by another, more clever word game.