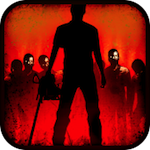 We’ve just finished spending some time with the New Zealand release of Into the Dead, a PikPok joint. It’s a first-person 3D endless runner that tasks you with running into the undead horde, as you desperately try to escape its clutches. The premise sounds silly. I mean, who runs into a head of zombies, right? I’d probably hide in a closet instead. But the recklessness and physicality of the escape attempt works in the game’s favor, informing some pretty hip action that’s been clicking with us all morning.

At the start of every run, you’re tasked with one central thing: survive for as long as possible as your character infinitely runs into the game’s desaturated fields and woods. Dodging is the most effective way to keep your brain in your skull. As you run, you can make adjustments on the angle of your approach, narrowly putting yourself out of reach of incoming undead hands. The camera kinda sways as your character moves. This gives the experience a more physical feel that what you’re used to in a runner. It’s a really neat trick.

You can also shoot zombies, if evading isn’t your thing. As you play, you’ll find little supply boxes scattered throughout the environment. When you pick one up, you’ll get guns that can be used until their magazines are emptied. Zombie targeting is automatic, so you just need to tap on the screen to fire.

Nuts and bolts-wise, weapons are the feature Into the Dead revolves around. Good runs give you coins that can be spent in the game’s Armory, where you can buy new guns and items like grenades and a chainsaw. All of these items are gated by missions. Missions are packs of challenges that you complete — stuff like “Kill 2 zombies in one run" or “Reach 250M in one run." These can be skipped with coins if you’re having a hard time. You can also just spend real money on coins to get guns, too. The overall IAP versus play balance seems really fair.

Into the Dead is at its best when you just play. When you don’t think, you just run. The camera touches and the game’s perspective add physicality to the experience, which is a thing we still don’t see in many endless runners.

The unfortunate thing about Into the Dead is that it combines two clotted genres — zombies and runners — into a single experience. But even if you’re tired of evading and killing zombies and running through procedurally generated worlds, give this a look. It’s physical, it looks cool, and the action feels great.

Into the Dead hits worldwide later tonight as a free app. UPDATE: it’s out now!