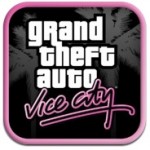 Grand Theft Auto: Vice City is now available in the New Zealand App Store, and it should be available later tonight in the US as the title continues worming its way around the globe. As you probably expected, this is a port of Vice City. Minus a few touch enhancements, this is the same game you played back in 2002 — the same 80’s-themed, open-world shooter you fell in love with as you cruised a color-infused Miami and jammed to Flock of Seagulls in a stolen car.

Vice City follows Tommy Vercetti, a mafia hitman and ex-convict. In the opening moments, Tommy finds himself in the middle of a drug deal gone bad. People die in a sneak attack, and Tommy loses both the money and drugs. The story revolves around Tommy trying to get the people responsible for setting him up. As the player, you’ll meet a lot of horrible people, probably accidentally kill thousands more, steal a bunch of cars, and listen to some really neat music along the way.

The game’s setting, Miami in 1986, is outrageously colorful. You’ll see a lot of bright whites, blues, and pinks as you cruise the open-world city, either on a mission or just farting around causing trouble. Miami in Vice City isn’t serious; its vibe is light and its people are ridiculous. This tone extends into the missions and writing. Even though a lot of bad things happen, you rarely feel weighed down.

On touch devices, you control Tommy with virtual buttons and a roving virtual stick. It isn’t the best solution in the world, but it works OK. Punch, car jack, and sprint are presented on the right half of the screen. Movement is available on the left. When you jump into a car, the controls change. A two-button directional pad replaces the stick, and car-specific actions like hand brake pop up on the right.

We haven’t noticed many notable mobile-specific features. Our gut says that the textures on the buildings in particular have been cleaned up a bit. Also, the frame rate seems a little bit smoother, maybe on par with the PC and Mac versions.

We’ve been playing on an iPad mini, and it runs perfectly. We tried it out on an iPhone 5, too, and got tricked into thinking it wasn’t a native app because of the letterboxed opening cinematic. But the actual game supports widescreen.

In the TA Plays, Eli and I play through the opening of the game and the first mission, which should give you a taste of what to expect from the game as well as its characters and the writing. There’s some salty language in there, so take that as a fair warning.

We’re pretty happy with how Vice City turned out, which is similar to how we felt about Grand Theft Auto III‘s mobile treatment. We’re going to spend a lot more time with this and get a review out to you in the near future. That said, you’re probably going to dig this, especially if you dug GTA III on iPhone and iPad.