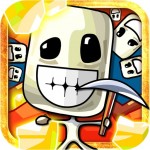 Micro Miners ($1.99) feels a bit crude and dirty in more ways than one, and it’s such a better game for it. It’s not just because the game has a “swearing" option for these hard-working miners to vent their frustration, isolation, and violation. I found myself waist-deep in lo-fi, pixelated dirt and several hours of my life gone in a flash. With over 40 lengthy levels, I easily became hooked on the intense, arcade-style digging, with almost every stage introducing some new and exciting twist.

Before I explore Micro Miners further, it deserves a quick history lesson. Markus “Notch” Persson, who created the digging and crafting phenomenon known as Minecraft ($6.99) made a little digging game in 2006 called Miners4k. Instead of exploiting these mechanics, Minecraft went the way of Infiniminer‘s 3D building. This left a fortunate gap for Micro Miners to fill, one that Notch publicly endorsed.

Not to crap on Notch (I certainly appreciate his blessings of smaller indies), but Micro Miners is the laser-focused, arcade-style digging game I wish he made instead. 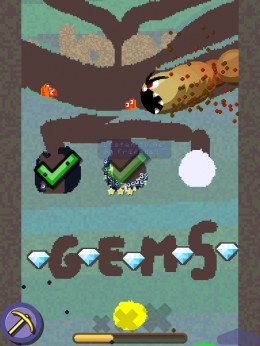 That said, there is so much to love in Micro Miners that it could appeal to fans of Minecraft, Dig Dug, Lemmings, and even Where’s My Water (Free).

These color-coded miners also have an apparently deadly allergy to deposits of a different color. While gold is a free-for-all, white miners only dig the white stuff (the “silver") and so on. The red miners introduced in the final third of the game help clear away lava. They are also uninterested and unharmed by silver, coal, and even gold. When they are all digging in the same space, a train wreck can quickly ensue if the mining population mixes.

Fortunately, Micro Miners allows you to giveth and taketh away. Simply tapping the lower left icon switches your god-like finger from miner to land-filler. This will allow you to quickly right your wrongs, momentarily suspend the miners (by smothering them, let’s be honest here), and otherwise create divergent paths for miner multi-tasking.

As I mentioned before, all the miners have a name and a personality to go along with their skills. More than whistling while they work, they talk to each other. If you poke them around, you will learn their names and they’ll even speak to you. This can all get a bit dirty and silly with the “swearing" option toggled on. 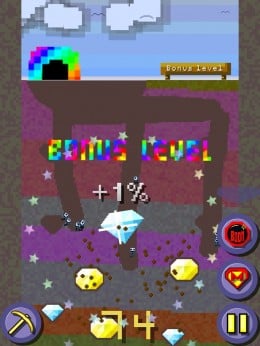 While the game can get you and your miners a bit hot and bothered, Jon Baken’s main tune is equal parts tranquil and bouncy. It’s quirky enough that I smile every time I hear it.

Also to help ease the tension, Super Miner can swoop in for a fee of your skill score to clear all deposits for those panic moments. While he only helps the situation, bomb power-ups simply destroy everything and everyone in their path.

Speaking of score, Micro Miners subscribes to the three-star trope of replayability, based on a percentage of how thoroughly you mine the deposits. Missing one is a hefty penalty, but there are diamonds and other shinies littered in later stages that increase the percentage. Really good miners can get over 100% for several stages, which is ideal for placing high on those leaderboards.

The graphics are bit of a literal high and low clash for me. The lo-fi and HD mix may not be the developer’s fault entirely, though. He states that Micro Miners was first rejected by an Apple reviewer for “too much pixelated graphics."

Everything necessary is visually discernible, so the graphics don’t impede the gameplay. The action takes place almost everywhere on the screen, so I don’t want to necessarily criticize the game for its few but big virtual buttons. However, I hit them and even activated the notification center a few times when I meant to help my miners at the top and bottom. Silly me.

Minor quips aside, almost everything in Micro Miners strengthens its core gameplay. There are 40 collectible items to uncover, which improve the amount of miners you start with. There are also over 20 animated tutorials that demonstrate new mechanics and strategies that deepen the levels.

When I mentioned 40 lengthy levels, some of these will take several minutes and won’t have any checkpoints along the way, either. This not your average, micro-stage mobile game. Thankfully, only a handful of stages made me wish there were checkpoints.

Speaking of crazy-hard stages, I’m staring at a failed screen while I wrap this review up, with all these adorable but sad miner faces popping up around the screen borders. I just have to go help these guys, now. You’ll be remiss to not join the Micro Miners crusade, too.