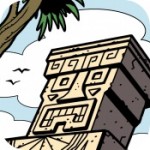 If you have daydreams about spending your days at dig sites in distant parts of the world, carefully identifying, cataloging and preserving the history of long-dead civilizations, Choice of Games has your back. Their latest gamebook release, To the City of the Clouds ($2.99) is mostly about the nitty-gritty of archeological field work. 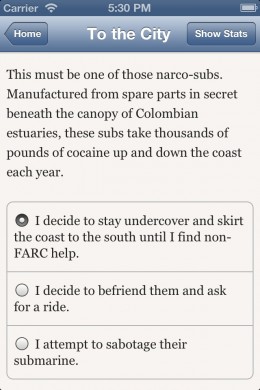 To the City of the Clouds situates the player as a Professor or graduate student of Archeology (your choice) tracking down a hot lead about an unexplored Incan City deep in the largely-unsurveyed jungles of Columbia. Documenting the existence of La Ciudad de las Nubes, the titular “City of the Clouds," would make your career.

The problem is that there is good reason so much of Columbia remains unsurveyed. In addition to environmental dangers from malaria to pit vipers, there is the FARC, the notorious drug-running gang/revolutionary army responsible for so much regional instability.

As long as To the City of the Clouds sticks close to the realities of field work, it’s really an impressive and incidentally educational game. The problem comes in when the game wants to have it’s archeology and it’s Indiana Jones too. Without spoiling any specific element of the plot, I have to say that, when you finally get to the City, it’s a bit of a letdown.

This is not because of any lack of action, but instead an excess of it, accompanied by a sudden shift in style and narrative convention. The meticulous realism breaks down in order to provide deathtraps and hidden treasure, narrow escapes and what seem like supernatual events. The game lampshades these plot elements and eventually brings the player back to the practical realities of modern archeology, but it still feels like we’ve jumped the rails of a National Geographic special and landed in Romancing the Stone. 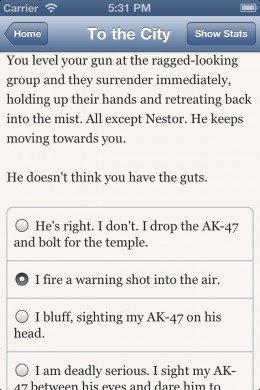 If a stumble at the climax of the plot doesn’t ruin the experience for you, To the City of the Clouds is still quite a game. Its only other real failing is that Bailey made the decision to include multiple opportunities for sex in the game (with at least four different partners), but neither romance nor any real sexiness. With neither tenderness nor any real passion, the sex feels tacked on, tantamount to “Have sex (y/n)?" At least it’s optional: you can be faithful to your Significant Other back home, or even single and celibate if you so choose.

Choice of Games has released an impressive range of stories lately, from superheroes to space opera to… supernatural property rental? To the City of the Clouds is the latest in a lineup that is approaching the sheer diversity of plots and genres that characterized the classic Choose Your Own Adventure series (albeit more grown-up).

So take your hallucination-inducing antimalarials, zip up your fancy weatherproof jacket, and stop to get a cup of chicha (fermented quinoa) before heading out into the jungle. There are ruins to be documented and/or pilfered!