Heroes Rise ($3.99) is the latest in Choice of Games‘ series of Interactive Fiction (IF) gamebooks, and their first release not to be titled “Choice of…" something. That’s a good start, because Heroes Rise is a much better title than “Choice of Superheroes." It’s also the first of their games to prominently credit a single writer (Zachary Sergi).

Choice of Games’ engine isn’t as versatile or pretty as that of Tin Man Games, lacking even the option to resize the text, but it is interesting under the hood. Among other things, your preference for Justice or Fame, and for Solo or Team hero-ing are tracked and influence your options and the game’s outcome. Your “Legend" score also matters: this reflects both how much of a true hero you are and what your public image is like: if you’re unknown, your Legend will be low. If you’re feared instead of loved, it will be negative.

Of course, in IF, it really all comes down to the writing, and Heroes Rise really excels in character development and meaningful decision making. 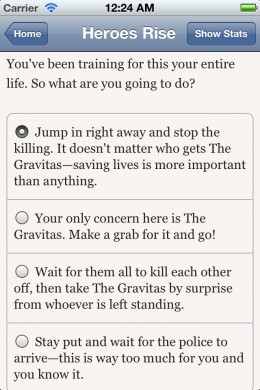 Gamer culture and superhero fiction both have misogynist and homophobic elements in them (viz. the treatment of Anita Sarkeesian), so it’s refreshing to see that Heroes Rise continues Choice of Games’ tradition of letting you play as a male or female protagonist of straight, gay, or bisexual orientation, a trick worked to great effect in Choice of Broadsides (Free) where playing a female character set you in an alternate-reality matriarchal age of sail, where ship’s crews are all female, and sailors come ashore long enough to pop out a few babies before returning to sea and leaving their husbands to raise the children.

Heroes Rise doesn’t do anything that dramatic: a couple of the characters change gender and orientation to match your protagonist’s preference, but the rest just are who and how they are. Playing a gay male hero, I felt that it was left up to me whether his sexuality was central or peripheral, and whether he was butch or flaming, except in the literal sense: you do not get to pick your superpowers in Heroes Rise, though you have a lot of freedom in how you apply them.

Sometimes, gamebooks offer blind choices (“do you open the door to the left or the door to the right?"), force illogical decisions (“do you cut off the thief’s hands or allow him to leave with Sceptre of Power?"), or allow for strategic decision making but not moral conundrums. Heroes Rise does a great job with the design and writing of its decision points. Some are pure action and strategy, but most are focused on who you are as a hero (or, potentially, a villain) and how you will relate to those around you. 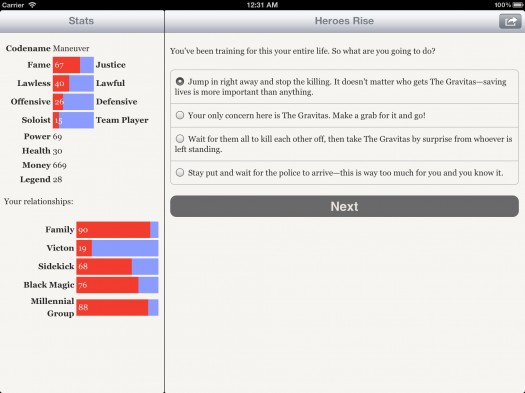 The game’s supporting cast is exceptionally well written, each with their own backstory, personality and secrets. More than anything else, I found myself playing to find out more about them. Many of the character reveals are powerful, and some are downright disturbing. This adds to the game’s replay value (never the strongest suit of a gamebook), as you can choose a different sidekick to mentor, and which of Millenium City’s big name heroes you idolize.

The game’s overall plot is functional but less compelling than it’s characters, and occasionally telegraphic. That may be the price of the game’s strengths in decision-making and character development. If so, it’s quite acceptable.

Given that seeing how decisions play out is the heart of the game, I wish Choice of Games would take a page from parser-based IF and include an undo option. Among the TADS, Inform, and Hugo-based IF set, not including an undo option is scandalous. There are statistical elements in Heroes Rise, but no random ones, so there’s no excuse for not letting players call for a do-over.

Heroes Rise is a real step forward for Choice of Games. Their next step should be to improve the visual appeal of their apps and add a few basic options.