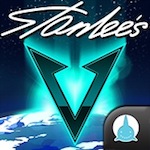 Earlier this morning, Eli and I jumped into Stan Lee’s Verticus. It’s a behind-the-back, endless … falling game that tasks you with skydiving to Earth’s core in order to stop some bad stuff from happening down there. We’re not so sure why the hero needs to start from the sky, but hey, he probably has his reasons. Also, we’re not too clear on why an evil robot is fiddling with Earth’s core, but it probably has its reasons, too.

As you fall, you’ll collect coins, gems, and have to avoid obstacles. For the most part, the obstacles are stationary mines, but as you descent into the city you’ll need to stay away from scaffolding. You can take more hits if you start buying into the suit upgrade system and descend faster with boosts.

Verticus is currently worming its away around the globe and shoot hit in the US tonight at around 11PM EST. We’ll be taking a more critical view soon, so keep an eye out for that if you’re interested.