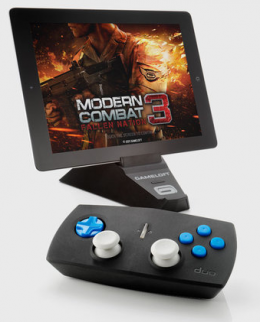 Thanks largely in part to Kickstarter, we’ve been absolutely drowning in various bluetooth gamepads for iOS devices ranging from actual shipping products to obscure prototypes. Today, Gameloft with the help of Duo have announced the Duo Gamer, the first bluetooth gamepad to make it through the Apple certification process. Comparatively, all other bluetooth gaming devices (including the would-be OnLive controller) work via the entirely Apple-unsupported method of pretending they’re a bluetooth keyboard and barfing a barrage of key presses to your device which various iCade (and similar) supported games can interpret as control input.

With the Duo Gamer paired via Bluetooth, it works, well, just like a game pad. You still get the keyboard popup for typing (Something iCade-like devices “break") and if you don’t have any supported games installed when you first pair it you even get a slick little popup suggesting titles that are supported. The way it all works is shockingly seamless and feels how using a device like this should. Unfortunately, the down side of this compatibility and the same Apple certification process that’s going to allow them to have the various made for iOS devices branding on the box and distribution through the actual Apple Store is a significant one: The Duo Gamer only works with Gameloft games, and as of this writing only five are supported:

Presumably, future Gameloft titles will be supported as well as other previous titles as it’s in both Gameloft’s and Duo’s best interest to get this device supporting as many games as possible- especially for the $80 price tag.

We’ve got our hands on one, and so far we’re not that impressed. Yes, playing these Gameloft games with a gamepad either on the iPad or plugged into a TV via HDMI provides a very console-like experience. Also, the precision of the dual analog sticks allows you to basically clean shop in online matches. However, the price point just seems crazy, especially when compared to other similar although uncertified bluetooth devices like the 8-bitty and the potentially Kickstarter funded iControlPad 2– Both of which will work out of the box with far more than five games.

Also, the controller itself has a very unfinished almost prototype-like feel to it. Where the Xbox 360, PS3, and even OnLive controllers’ graceful ergonomics fall right into your hands the Duo Gamer almost feels closer to those all-in-one game controller systems that you plug directly into your TV which were popular at shopping mall kiosks and drug stores around the holiday season a few years ago. Holding it for extended periods of time feels awkward, especially as the games attempt to stick to a traditional FPS control scheme relying on extensive use of the shoulder buttons- Forcing you to always hold the Duo Gamer in a way that seems strange. 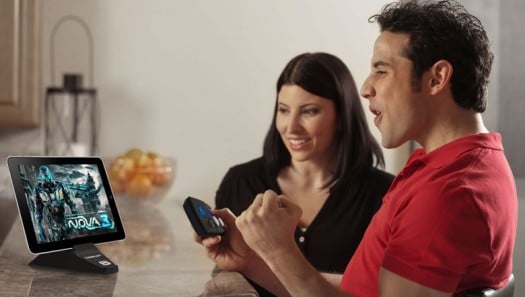 The Duo Gamer should be available soon via Apple Stores, Amazon, Best Buy, and Target. I’m not entirely sold on it, but if you’ve got $80 burning a hole in your pocket and you are are stoked for the presumably supported Modern Combat 4: Zero Hour or you just get super excited and fist pump when you see the N.O.V.A. 3 title screen like the guy above… Rock on, I guess.