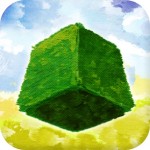 Monkey Labour ($1.99) developer Dawn of Play delivers again with a touch-based Tetris-inspired game that finally nails its controls, even if it’s all purposely done backwards.

The goal in Dream of Pixels ($2.99) is to unpack the cascading clouds, piece by piece, as long as the shape you remove doesn’t collide with any others on the way down. The classic mode asks players to survive as long as possible, clearing all the clouds before any touch the bottom of the screen and end the dream. For every ten lines cleared, the points system and the speed at which the clouds move increase. 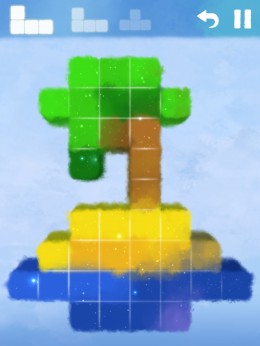 In addition to tallying up lines, players can work towards a high score. Unpacking a single line nets the most basic points. Players score more by unpacking up to four lines at one time and by comboing lines in succession. Unpacking random white clouds with a specific tetromino unlocks a huge bonus, as well as an additional game mode.

Unpacking in Dream of Pixels is the most seamless interaction with a tetromino I’ve had on a touch-device. The upper-left HUD in Classic mode indicates the current tetromino shape players can carve out of the clouds with the touch and release of their finger.

Players can hold their finger and drag from left to right to see all the possible areas from which the shape can unpack. The game also marks red where players can’t unpack and even demonstrates how the particular shape would collide with a cloud below it.

The Puzzle mode removes the pressure-cooking variables from Classic mode and instead tasks players with unpacking 60 images using limited shapes. 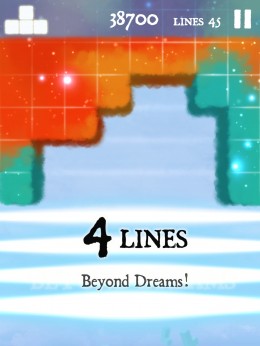 This mode has some rather smile-inducing indie cameos, too: Vlambeer’s Super Crate Box (Free), Trebella’s Polymer ($2.99), and Matt Rix’s Trainyard ($0.99) are just some of the puzzle images I deconstructed. Not all the cameos made it in Dream of Pixel‘s release, but players can count on more appearing in a new puzzle pack update post-launch.

Those wanting to skydive into the most thrilling parts of Dream of Pixels can do so with Pro, Nightmare, and Shattered Dream modes. Pro rushes players into a faster-paced, higher-scoring Classic mode. Nightmare is littered with isolated floating clouds that must be cleared up as quickly as possible. Finally, Shattered Dream involves Classic mode gameplay with randomly placed holes in the fluffy grid.

Along with plenty of modes, Dawn of Play stuffed this app with a load of achievements for various advanced skills in the game and leaderboards for each mode. It’s worth mentioning the developers also offered up the Dream of Pixels prototype for free via browsers, but those seeking visual stimulation should stay clear.

The aesthetics in Dream of Pixels are simple and appropriate, with light and pleasant music and sound effects. The tetrominoes make me wish I had a textured iPad screen, so I could actually feel the fluffy, colorful clouds.

The only potential flaws or suggestions I have for Dream of Pixels would be to allow players to switch out their tetromino or see upcoming tetrominoes for tactical strategies. Maybe it’s not necessary, but seeing multiple pieces only in the puzzle mode’s HUD made me miss them when they weren’t in the others.

Even without a foretelling HUD, I managed a septuple combo. I have faith you will, too. And more importantly, you’ll want to keep playing after you fulfill every achievement.

If only I could look up and touch a tetromino-filled sky… Until then, I thankfully have Dream of Pixels.