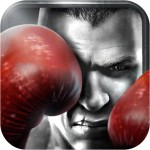 Boxing is all about endurance. A truly great fight is a demonstration of that endurance; the fighters’ stamina, the punches they take, getting up from the mat, and their ability to still deliver a hit when they’re so exhausted that even their earlobes ache.

But endurance isn’t an easy quality to replicate digitally. That’s why most fighting games rely on quantifying your dexterous skill, rather than your stamina. If it takes a lot of stamina to play a game, it’s generally conceived as being a laborious task that doesn’t easily translate into entertainment.

Real Boxing (Free), therefore, is quite unique amongst other games in its genre as that’s precisely what it’s all about; endurance. It captures that quintessential essence that turns a brawl into a sport. It tests every fiber of your endurance while remaining solid entertainment, leaving you quite breathless after a fight; fatigued by defeat or euphoric from triumph. 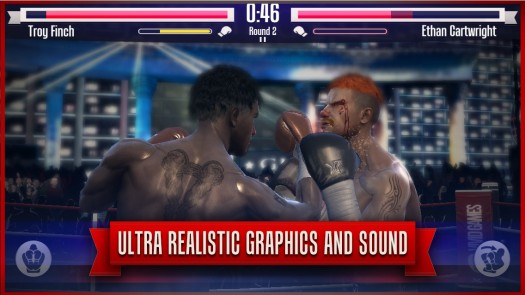 This digitization of the sport begins with outstanding graphics provided by the Unreal Engine. Your pugilists live, bleed and breathe – they breathe very heavily, most of the time – and they really do dance like butterflies. The photo-realistic fighters are made all the more tangible thanks to incredible animation, so when a perfectly-timed hook lands on a realistic chin, the sensation can be felt in your back teeth.

There is still a strong emphasis on fighting technique, of course, so Real Boxing also takes a swing at your dexterity in good fighting game tradition. Gesture controls are provided the offer jabs, hooks and uppercuts on both the left and right sides, while additional buttons offer blocks, dodges and grabs. All are very easy to access in the heat of battle, and are responsive without being too easy. An uppercut, for example, doesn’t land nearly so often as a jab, but is all the more valuable for it. 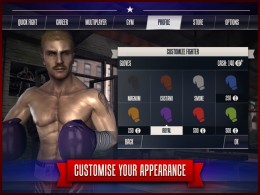 Countering after a successful dodge amplifies your attacks significantly, which places a real emphasis on defense. Punch wildly and continually, and all you’ll achieve is an exhausted boxer who’s ready to chew the canvas. Alongside the main energy meter at the top of the screen – which represents how far you’ve got to go before you dive for the floor – you must also keep an eye on the fluctuating stamina bar to make sure you’ve got the reserves necessary to land a decent blow.

Stamina replenishes quickly while you hold back or block, but run it on empty and your performance suffers badly. Should your energy get too low you can grab the opponent and tap furiously at the screen to regain a bit of breath and avoid the mat. Should you go down, this same Track & Field-style screen bashing gets you back on your feet a bit quicker. It’s a great mechanic that leaves you with a genuine feeling of weariness when the fight resumes, further embellishing that underlying spirit of sporting endurance.

And as you’re undoubtedly aware if you’ve been following the game’s development in our forums, Real Boxing also boasts quite a unique control alternative. Position the iPhone (or iPad) and yourself accordingly, and the front-facing camera can be used as a Kinect-esque input device. Stand back a little to swing, block and dodge like a real-life shadow boxer and your avatar mirrors the performance on-screen.

It’s a fascinating and incredibly inventive option, and the response from the game engine is good. It does rely very much on your setup, however. For one thing, your device needs to be positioned in a stand so it can see you, and you can still see it; not always the simplest task (especially on the train) but one worth perfecting if you want to enjoy a real game of Real Boxing. 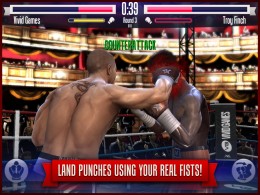 Vivid Games’ V-Motion Control system is undeniably an impressive feat, though quite how much use you’ll get out of it – after initially sampling the novelty – remains to be seen. Should you become a member of the inevitable Real Boxing cult, putting together a stand and a location just for your digital boxing matches will be a worthwhile endeavor. For the more casual player, the gesture controls are likely to win out. Either way the option is yours, and rest assured that the game is very controllable through either system.

It should be noted that Real Boxing obviously needs an iPad 2 or higher for the motion controls, given that it requires a front-facing camera. But also be aware that an iPhone 4S or higher is required on the smaller screen. The iPhone 4 can’t cope with the processing demands of V-Motion, which could be a letdown for those who (quite rightly) don’t feel that the fourth gen is ready for retirement yet. It still deals with the touchscreen controls admirably and provides a great fight, but no shadow boxing for you.

A host of game modes, including full Game Center online multiplayer, a career and quick bouts are all present and correct, while training your boxer offers up a few mini-games to build your stats for tougher fights. What’s especially appealing about training is that it’s not just tacked on to fill up a features list; this is an important part of your career, and it quickly becomes clear that ignoring training puts your fighter face down on the canvas from his second fight onwards. Making good use of the heavy bag, skipping rope and speed ball ensures you remain a contender in the ring, and adds vital depth to the sporting simulation focus of the Real Boxing.

My own endurance was tested with the extensive fighter customization options that are available. This isn’t an aspect of gaming that I particularly appreciate – I like to play, not paint – but it’s fair to say that a lot of gamers like to make their avatar their own. If that’s your bag, Real Boxing has menu after menu of changes you can make until you’re alive and bleeding on the screen. It’s all optional, of course, so it’s good to see Vivid Games catering for those who enjoy excessive involvement, and those who can’t wait to get in the ring.

This isn’t called Virtual Boxing, or Street Boxer, or Extreme Boxing. It’s called Real Boxing for a very good reason, and it lives up to its name impeccably well.