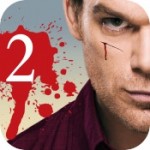 The Dark Passenger is definitely not to everyone’s taste. The celebration of murder and violence that permeates the Dexter TV show and books can turn both the stomach and head of those who don’t share a guilty desire to see brutal justice administered with the edge of a razor blade, so Dexter the Game 2 ($0.99) was always going to have a limited audience.

But that small audience is a passionate one, and revels in the demonic righteousness of the conscientious serial killer. The first game was quite the technical breakthrough on iOS, and despite its many flaws, Dexter the Game whetted our appetites for the possibility of a broader, grander journey with the Dark Passenger.

In this sequel, the developer made the exciting decision to open up the world of murder capital Miami, with the promise of giving you free reign to pursue your deadly justice by night, and develop your suburban camouflage by day. It’s a rock-solid concept that sounds like the perfect Dexter game. 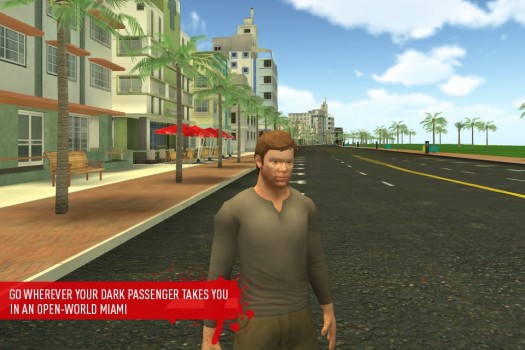 So it’s as painful as a well-placed knife to the aorta to see what sort of dim – not dark – adventure our favorite vigilante is subjected to. Crimes are phoned in to you by Deb, or Angel, or whoever makes the scene first, and it’s your choice as to whether or not you respond. This aspect is more about keeping your public mask in place, and avoiding suspicion by performing your blood spatter analyst duties diligently and often.

These crimes occur pretty much at random, with an examination of the scene leading you to solve the crime or, more importantly, quietly identify the criminal. Forensics, apparently, is a very simple task, and not remotely scientific as the TV would have us believe. The crime scenes are little more than obvious solutions without a puzzle, and are padded out by a quick trip to your lab for some grating exposition that casually reveals the killer’s identity.

Here begins the Dark Passenger’s hunt, in which you begin stalking your prey to prove their guilt. Satisfying Harry’s code means following a horribly wooden avatar around until the boredom tips just toward the unbearable, after which they’re confirmed (always) as guilty. 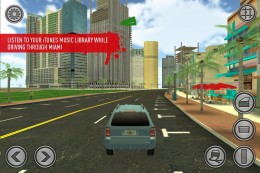 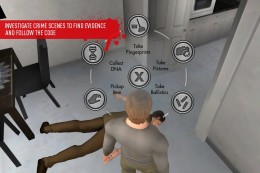 What should be a stealth sequence as you work at capturing your victim generally becomes a stilted fight against their small gang of followers, knocking them out clumsily until your mark is inevitably subjugated. What’s missing is the sensation of stalking a victim, and surely there could be a mini-game or two built around setting up the kill room or dismembering and disposing of the evidence, but instead the mission ends with a whimper and never a scream.

The notion of a sandbox seems to have confused the developer in Dexter the Game 2. Miami is a barren and lackluster playground devoid of toys, with almost no other vehicles or people to be found. The only time you ever really run into other characters is at a crime scene, where they stand around like lobotomized Sims, waiting for a hug or a new lamp. It’s almost surreal, in fact; the kind of scenario you might expect to be in Dexter’s nightmares, when he’s trapped in a cardboard world where there’s no one left to kill.

It’s not often that we see a genuinely broken game, but Dexter the Game 2 appears to be one of them. The cars drive through intangible walls, the character’s polygons fall apart or evaporate, the camera swings wildly around random pivot points and the control mechanics chop and change as though the joystick has come loose in its mounting. It’s probably just as well that Miami has been deserted, because navigating a crowd or traffic would be almost impossible.

If there’s one area where Dexter the Game 2 comes close to success it’s in the audio. The soundtrack is its only saving grace, matching the audible atmosphere of the TV show with pinpoint accuracy, while the voiceovers from the show’s actors are equally faithful. There’s even a great dub step remix of the opening theme thrown in for good measure, but sadly the outstanding sounds are unable to salvage a damaged game.

If Dexter were out there hunting for gaming transgressions, Dexter the Game 2 would never have made it onto the App Store. It would have disappeared without a trace, woken up strapped to a desk with rolls of plastic, and made to answer for its crimes in blood and dismemberment.