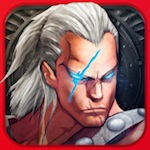 This afternoon, Eli and I spent some time with tonight’s other game Wraithborne (Free). It’s an isometric brawler that shares a lot of features and mechanics with dungeon crawlers. In the game, you play as big dude tasked with hacking and slashing goblins, werewolves, and other fantasy oddities on a magical quest. With either touch or virtual controls, you’ll string together devastating combos and activate special magic powers by tracing runes.

Split across easily digestible chunks, this is a breezy game built for mobile through and through with its accessible controls and goals. It’s also a looker, as you’ll see.

We haven’t seen enough of Wraithborne to offer a firm recommendation, but there might be enough in this video for action game fans. Check it, see if it clicks, and if you’re feeling it grab the game from the link below.