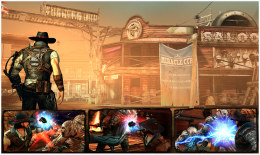 If you’ve been following the lists we’ve been doing of our users’ most anticipated games, you’ll be well aware of Bladeslinger [Free]. Folks on our forums have referred to it as “that western-themed Infinity Blade" and it’s one of those games that has had a nebulous release date since we first laid eyes on it.

Well, as of a few hours ago, the game is available for free on the Canadian App Store. Generally speaking developers do these sorts of “test" releases to make sure their whole free to play server infrastructure is working properly. According to forum members who are already deep into Bladeslinger, it’s not a free to play game per se as much as it’s just something more similar to Horn and other games with a bunch of optional consumables you can buy.

So, we’re not really sure what (if any) catch there is behind this free “soft" release of the game, but if you’ve had your eyes on the game now is your chance to give it a spin if you’re a “Canadian" who followed one of the many guides online that detail creating a Canadian iTunes account or if you’re actually from Canada.

If you don’t have a Canadian iTunes account, feel free to live vicariously through those who do in our forums.