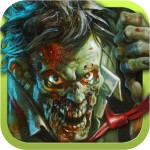 That transitory period between the ’80s and the ’90s was a special one for me, a time frame defined by early crushes on big-haired celebrities, permanent damage from exposure to the Alien trilogy and MC Hammer, and game books. Lots and lots of game books. Like a lot of bibliophilic kids my age, I was enamored of them, so much so that I never really had much of an allowance because of how many ‘choose-your-own-adventure’ books I’d buy. Eesh.

So, you can imagine my delight when Ian Livingstone returned after a seven-year interlude with Blood of the Zombies ($5.99), a not-so-gory yet satisfying romp through the labyrinthine depths of ‘insane megalomaniac’ Gingrich Yurr’s suitably gothic-seeming castle.

Here, you’ll play as a mythology student who finds himself locked in a dungeon under the surveillance of the grotesque ‘Otto’. After realizing that survival in captivity is impossible, your character eventually endeavors to escape and, depending on whether you succeed (it’s entirely possible to go splat by the second page) or not, that’s where the whole thing begins. 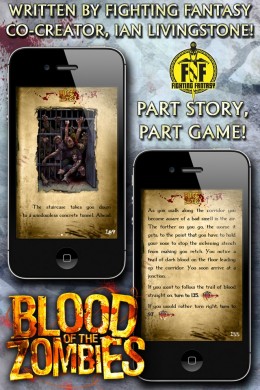 While there’s a lot that can be said about spending a nostalgic afternoon with the physical version, Tin Man Games’ iOS-based interpretation has plenty to offer as well. Though lacking in that ‘new-book’ smell, it’s still an attractive package — the virtual pages are suitably worn-out and grim-looking, the roll of the digital dice almost as exciting to watch as the real thing, the richly-colored illustrations as easy on the eyes as the bookmarks feature is on the soul.

If you’ve played any Fighting Fantasy game in the past, chances are you’ll be instantly at home here. It works on similar principles. Before anything happens, you’ll be required to roll a die to determine how hearty your fellow will be. Just one die, mind you. Unlike previous installments, Blood of the Zombies is only concerned about your Stamina. Everything else? Not so much.

Additionally, you’ll also be able to select from one of the game’s three difficulty settings before every adventure. Want a hardcore experience that will have you dying repeatedly? Prefer to take a more relaxed approach that will allow you to cheat as much as you want? No problem. It’s your prerogative. No one’s going to judge.

Playing Blood of the Zombies is easy enough. It mostly consists of navigating through several chunks of text before making important decisions like deciding which corridor to go down and whether it might be advisable to open that creaking, ominous-looking door in the corner. Combat, for the most part, is dependent on the roll of the ubiquitous dice. Should you be fortunate enough to fight the game’s many ravenous ghouls with more than your fists, you may even be able to spin multiple dice across the virtual page.

The writing in Blood of the Zombies is solid if not the sort that will keep you up in night, something that may or may not come as a disappointment to some. That said, the relative bloodlessness of, well, Blood of the Zombies can make it the perfect method to introduce ‘choose-your-own-adventure’ games to a younger individual. Beautifully presented, a little campy but oh-so-worth that walk down memory lane, Blood of the Zombies will not go amiss in your library of interactive iOS-based tales.