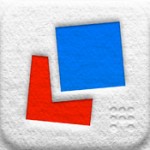 When I first heard that Loren Brichter of Atebits – creator of the groundbreaking Twitter client Tweetie (RIP) – was making an iOS game, I was extremely interested. After all, Tweetie demonstrated exceptional UI design and intuitiveness, as well as a clean aesthetic. Put all of those types of qualities towards an iOS game and, yeah, I’m totally on board.

Now the first iOS game from Atebits is finally here, called Letterpress – Word Game (Free), and it does indeed display a remarkable level of design finesse, clean aesthetics, and simple to-the-point gameplay. It’s not going to blow you away in the features department, rather it picks one thing to do and it does it extremely well. 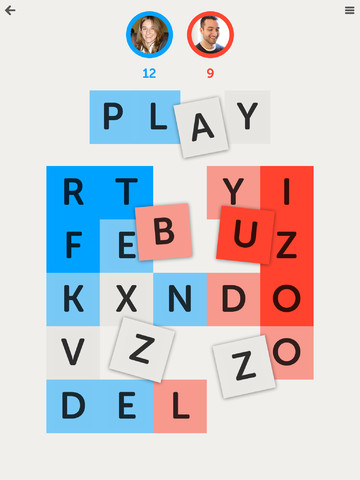 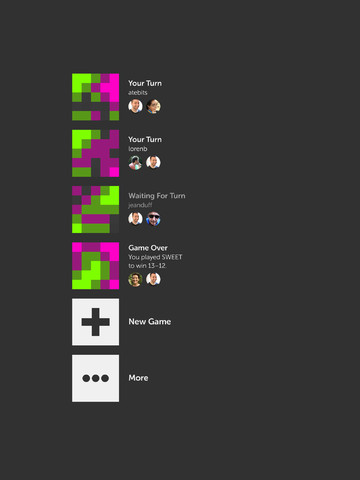 I think it might be the core design of Words With Friends that rubs me the wrong way. I don’t like having point values assigned to each letter. Rather than finding the most interesting word out of your allotment of letters, you’re stuck playing a trial-and-error game of what word will land you the most points while trying to take advantage of the bonuses on the board. Somebody described their experience with Words With Friends to me as “tedious", and that totally nails it for me as well.

This is where Letterpress differentiates itself. It gives you a 5×5 grid of letters to choose from. Each letter used is worth just one point, which obviously makes bigger words worth a bigger score. But Letterpress isn’t just about who can rack up the highest total score, it’s much more about trying to outmaneuver your opponent and playing the board itself so that you wind up having the most points by the game’s end. 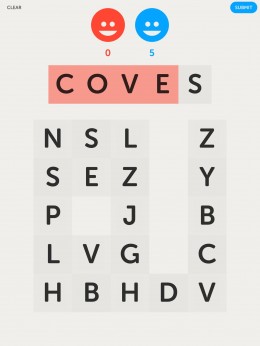 Each letter you use in a successfully played word gets branded your color on the board. When it’s your opponent’s turn, they can try and use your colored letters and “steal" them back in their own word, changing them to their own color while also taking away the points you previously earned for using them. This will go back and forth until every letter on the board has been switched to a color, and the player with the most colored tiles (and thus the highest score) is the winner.

Here’s where things get tricky. You can also “lock up" a letter tile by changing all tiles surrounding it to your color. So, if one of your colored letters is surrounded on all four sides by more letters of your color (or three sides if it’s a tile in the corner of the board) then the surrounded tile becomes a darker version of your color and is “locked." A locked letter can still be used by either yourself or your opponent in subsequent turns, it just won’t be worth any points if you do use it.

It’s a small aspect, but it toally changes what would normally be a pretty simple back-and-forth word game into something much more strategic. In addition, if you use and reclaim the letters that are surrounding an opponent’s locked letter, you’ll then “unlock" it and it goes back to merely being a normal tile of your opponent’s color, which can then be used to earn a point and reclaim as your own color like normal.

It feels complicated to explain, but trust me when I say after just a few rounds of Letterpress the mechanics become clear. Mastering them, however, is what will keep people coming back over and over again. 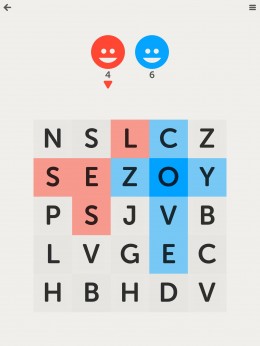 Being adept at making fancy words doesn’t hurt, but it’s also not the most important aspect of Letterpress. Bigger isn’t always better, as a shorter word might be able to steal more points from your opponent, or unlock a surrounded tile for use in another turn. It’s just as much about planning ahead and looking at the current situation of the board as it is thinking of the biggest, most impressive word, and this is what I love most about the game.

As I mentioned before, Letterpress is an aesthetically pleasing title as well. It uses clean lines and simple colors, with lots of theme choices so you can mix things up a bit if you feel like. The UI is also impressively intuitive, as just about everything you can do in the game is performed just how you think it might be.

For example, if you want to recall a letter from a word you’re making, simply tap it to bring it back onto the board. Or if you want to reorder the tiles simply hold down on the one you want to move and drag it to where you want it to be. If it’s been a while since you’ve taken your turn and you want to see what your opponent’s last played word is, just tap on their avatar. Practically everything in Letterpress works just how you would expect, and its minimalist style and smooth animation make it feel like a high-end experience, similar to Clear for note-taking.

That’s about all there is to Letterpress. It will connect you with random opponents or friends over Game Center for multiplayer, but there is no single-player option or an AI opponent to face if you happen to be offline. Also, Game Center has its own share of quirks with matchmaking, and Atebits has told me he’s investigating using his own server infrastructure just to have a bit more control over the experience.

When I said that Letterpress did one thing and did it extremely well, I meant it. It’s a fantastic asynchronous online word game and nothing more. It’s also a fantastic example of how design can enhance the experience of playing a game, as Letterpress is a joy to look at and to use.