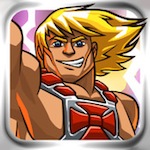 Earlier this morning, Eli and I spent some time with He-Man: The Most Powerful Game In The Universe. It’s aside-scrolling action game that puts you in the shoes of He-Man and tasks you with killing lots (and lots) of skeletons across a variety of levels, each of which rolls with a specific theme. The end goal is to defeat Skeletor, since he’s evil. Or something like that. Was there ever a reason for He-Man to beat up Skeletor?

Anyway, we’ve got footage of the game in action below. A note on the controls: He-Man uses, essentially, two floating d-pads. On the left-side of the screen, you control the direction He-Man walks. On the right, you tap to activate attacks.

He-Man The Video Game will be available later tonight, as the game worms its way around the rest of the world. We should add that if you dug the show, this is probably going to be your jam. It appears pretty faithful to the style and tone of it.