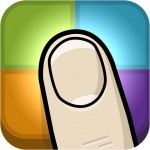 Streaming Colour Studio‘s Finger Tied ($2.99) provides some of the finger sliding sensations of Fingle but tests players’ speed as well as their dexterity. In over 100 levels, your fingers must make it from point A to point B as quickly as possible, without lifting from the board or moving out of bounds.

He makes getting from point A to B on a static screen rather exhilarating. The timer which dictates the medal you receive starts as soon as you place your fingers on all activation points. These points are single-shaped, bright, and pulsing, contrasted from the end points which are double-shaped.

These end points are also optional; without them, your fingers become roadblocks for unnatural finger-Twister. With enough practice, though, you can increase your time to get the gold. I appreciate that I can retry a failed level quickly by touching anywhere on the board, instead of moving my fingers way down south to the “retry" button. Unfortunately, I can’t retry a stage for a faster time the same way if I don’t fail.

Finger Tied requires at most the tying of four fingers at one time, and it cares not from where or whom those fingers come. It encourages playing with up to three other people, but the developer assures that a player can singularly achieve all the gold medal times with practice. In other words, don’t be put off by the heavy multiplayer focus of the game’s trailer.

The leaderboards are equally indifferent as to how many players play. At this point, it simply rates the fastest completion time for Finger Tied‘s four level groupings. Playing multiplayer for the fastest time is a bit of a mixed blessing, anyway, I believe. Having to sync up when to start with another human can cost you time in simpler levels, but that other hand can move freely in more complicated levels.

Finger Tied ends up being tongue-tied in only two respects for me. The upbeat music wears off shortly, with only one track offered. The game also includes a level editor but feels incomplete without a way to share these levels beyond physically passing the iPad.

For now, players have over 100 levels and a way to create an infinite amount more to play locally solo or with friends for $1. If you want a fast-paced game that demands digital dexterity, Finger Tied is an easy recommendation.