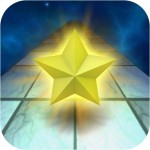 There’s nothing quite like speed-based reactionary games on iOS. Smooth framerates combined with fast-reflexes and responsive controls usually make for a title well-suited for the touchscreen. Skyriders ($0.99), with its futuristic feel hits on all these points and then some. Add in great level design and some subtle RPG mechanics, and Skyriders rises above the rest as a great example of challenging and fast arcade fun.

From a basic gameplay perspective, Skyriders is relatively simple. Each level has the player racing from start to finish on a track filled with boosts, stars, barriers and chasms. Besides simply making it to the finish line (which isn’t as easy as it may sound), players are also tasked with trying to get as high a score as possible, which is centered around earning and maintaining a high multiplier. Multipliers are gained by collecting stars and hitting boosts consistently (a meter at the top of the screen acts as a timer for how long you have to boost or collect a star before the multiplier dies). Meanwhile, hitting barriers (you can jump or dodge them) instantly kills your multiplier, while falling off the racetrack ends the run. 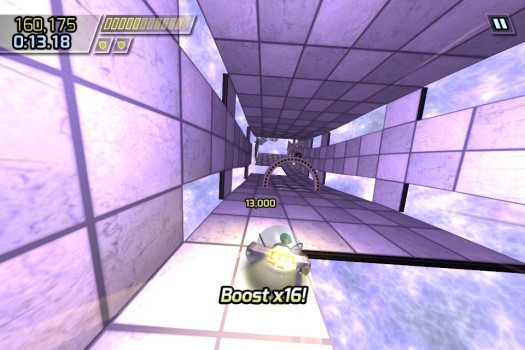 Skyriders also includes a few more features that add some depth to the mix. Stars are separated into two colors: red and yellow. Whenever you collect stars of one color, your ship becomes attuned to that color, and any stars of the other color will kill your multiplier and slow down your ship. Thankfully, you can ‘flip’ your ship while it’s in mid-air to reverse its polarity, allowing you to collect those different colored stars that come up. Later additions like the inclusion of ramps provide bottlenecks that you have to hit in order to continue races.

Where Skyriders succeeds is in its excellent implementation of all the individual components of a race. Stars are perfectly placed to keep multipliers going, with different colored stars placed strategically to give players a chance to time and reverse polarity. Boosts are also appropriately located and do a great job serving both as preservers of score as well as necessary tools to finish races. Ramps, meanwhile are used sparingly but enough to keep players honest — an important aspect when you realize that many levels have multiple routes with their own stars and boosts. 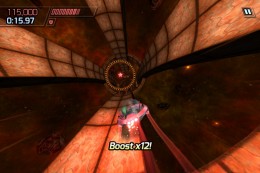 As you can imagine, the strengths listed above are all indicative of Skyriders’ great level design. Missions are divided into zones, with each zone offering 8 levels. Level difficulty is paced perfectly, with the first zone acting as a glorified tutorial and the challenge ramping up afterwards. Each track also does a great job of offering multiple paths while still offering equal challenge. Finally, tracks feel the perfect length — long enough to build tension while short enough to keep you coming back.

That last point is exactly what makes Skyriders great: its encapsulation of that illusive ‘just one more’ feeling. Players are motivated to complete races for three separate reasons. Obviously, you’ll want to finish a track to unlock the next one, but the game also tracks high scores for leaderboards as well as for power-ups. Score enough points on each mission and you earn ranks to spend on upgrades that range from shields that temporarily protect multipliers from crashes, to speed boosts and higher score multipliers.

That alone greatly increases replayability, as it motivates players to refine runs to try and score more points (only absolute score counts towards power-ups so you can’t simply replay levels and have scores add to the total). Also, the inclusion of ‘challenge’ levels, which basically have you run through an entire zone’s worth of levels in one run are a great idea. Challenge levels are optional, tough, and award a ton of points if completed well.

There are other areas that Skyriders does a great job with too, such as its control schemes. Since your ship is on auto-acceleration, controls are limited to left and right tilts, and jumping (double-jumping reverses polarity). Skyriders offers a variety of control schemes, including virtual button and tilt-based options. While the tilt controls didn’t do it for me, other choices worked well, making the task of directing my ship easy. Considering how tough later races become and how fast tracks are (another good feature), having a decent control scheme is a godsend. My only complaint is the difficulty in controlling my ship mid-air, which I’m not sure is a deliberate design choice or just an issue with how I’m steering.

It’s hard to find much to complain about in Skyriders. Simply put, it’s a great, fast-paced platformer with excellent balance in terms of level design, controls, and replayability. The fact that the game looks great and has decent music doesn’t hurt, either, and Skyriders is an easy recommendation for iOS gamers to check out.

For another look at Skyriders, be sure to check out our TA Plays video.