Let’s pretend, just for a moment, that you had just woken in a dilapidated-looking hospital room. You have no memory as to how you got there, no clue as to where you are and no idea as to who the inhabitants in your quarters are. How would you respond? If you’re the protagonist in 3F Interativo’s point & click adventure Reversion: The Escape ($1.99), you would ask questions in a relatively calm and controlled manner. Er. Right.

Unlike many point & click adventures these days, Reversion: The Escape isn’t big on the slap-stick humor. Set within a dystopian future, Reversion takes place in a ruined Buenos Aires. According to the somewhat shady-looking medical personnel you encounter upon consciousness, twenty years has passed and the government is in shambles. Your only clue as to what happened? A torn fragment of a photograph.

Naturally, given the nature of such things, you also find yourself imprisoned within the room under the surveillance of an even more suspicious-looking guard. With the prospect of interrogation by a mysterious Colonel looming over your head (and the very name of the game giving it away), you eventually find yourself endeavoring to seek escape. 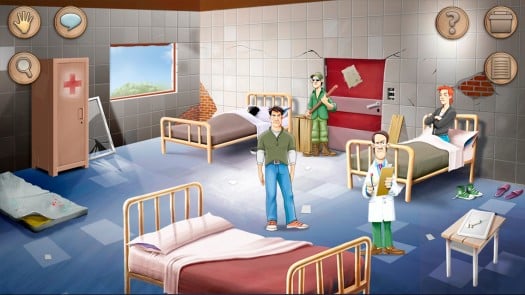 By and large, Reversion: The Escape follows the traditional point & click adventure formula. There’s a fair amount of dialogue to go through, inventory-based puzzles and a few unique challenges that will likely evoke some amount of frustration. The cast is likeable if somewhat cliched; a fiery-tempered redhead? We’ve definitely seen that one a few times before. For those concerned that Reversion: The Escape might be populated by obtuse puzzles, I’m happy to report that the game is relatively free of such things. If anything, it can occasionally feel a little too straightforward, something that may not be quite as appealing to Monkey Island veterans.

While the general presentation is attractive enough, Reversion: The Escape is unlikely to stun you from an audiovisual perspective. Music is simple and functional, sufficient to provide an auditory background to your activities but little else. Interestingly, the game does feature full voice-overs. Unfortunately, however, they’re executed entirely in Spanish so if you can’t speak the resident lingua franca, you’re going to be flat-out of luck.

In spite of the occasional error messages that the game spits at you, I don’t have too many complaints about Reversion: The Escape. Lag can occasionally surface, along with the odd grammatical error or two. Asides from those minute (if moderately annoying) issues, Reversion: The Escape is a largely competent affair. 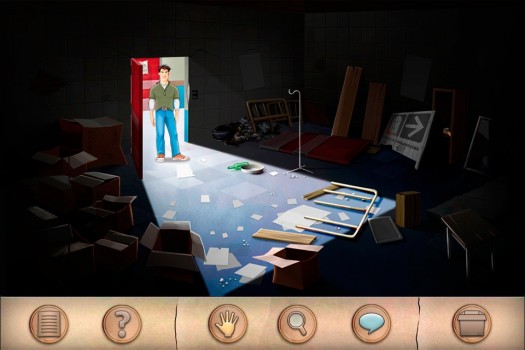 Now, here comes the most important question: should you buy it? Maybe. If you’re at home with the idea of investigating yet another amnesiac’s quest for his memories, you might enjoy this. If you have no problems with the genre and can abide by the occasionally flat-sounding Spanish voice-overs, you might even adore this.

A worthy debut on the iOS app store, Reversion: The Escape is unlikely to be crowned ‘Adventure Game of the Year’ but it’s certainly still worth escaping to.