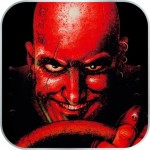 This past June Stainless Games announced that they would be releasing the cult-classic vehicular combat game Carmageddon to the App Store this year as a side bonus of their successful Kickstarter campaign for the upcoming franchise reboot Carmageddon: Reincarnation. We went hands-on with an early version of Carmageddon for iOS just last month, and felt that it was a faithful port of a game that hasn’t exactly aged gracefully in many ways, but is still highly entertaining.

Well, Carmageddon (Free) launched internationally earlier today and has just become available in the US App Store. As promised, to say thank you to all the supporters of the Carmageddon: Reincarnation campaign, Stainless Games has made the iOS version completely FREE for the first 24 hours.

They’re doing it right with this Carmageddon release too, as the app supports the iPhone 5 and 5th generation iPod touch widescreen Retina Display, iCloud save syncing, and is Universal. It also comes equipped with Game Center leaderboards and achievements, a slick YouTube replay exporting feature, and tons of control options. That’s all on top of the fairly comprehensive content of the game itself, and oh yeah, it’s FREE.

If you were a big fan of Carmageddon back in the day, then you are no doubt smashing the download button with furious vigor. If you missed out on it originally, there’s no reason not to give it a try for free to see if senselessly killing pedestrians with your car in order to better your performance is your cup of tea. Hey, it isn’t for everybody.

Also, our forums have been filling up with impressions throughout the day, which are skewing towards the positive, so be sure to check that out as well.