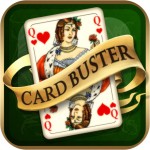 Back in the fourteenth century, a hot new device hit Europe: it was pocket-sized, and people used it for entertainment as well as divination, and in order to make poor financial decisions. Playing cards were hot (and expensive) and it was amazing all the things you could do with them. The more things change, the more they stay the same. Reiner Knizia: Card Buster ($0.99) is optimized for iOS, but it will also run on a deck of playing cards, if you still have them.

Kniza is well-known for his love of poker-like mechanics, betting and bluffing, so it was only natural that he’s create a game that used poker hands for scoring, without any betting or bluffing. It really is, if you know the scope of Kniza’s work. In Card Buster, Aidem Media and Bulkypix have put together three related games: Grid Buster, Deck Buster 32, and Deck Buster Wild. The latter two games were previously released by Aidem as Reiner Kniza’s Deck Buster ($0.99), so Grid Buster is what’s totally new here. 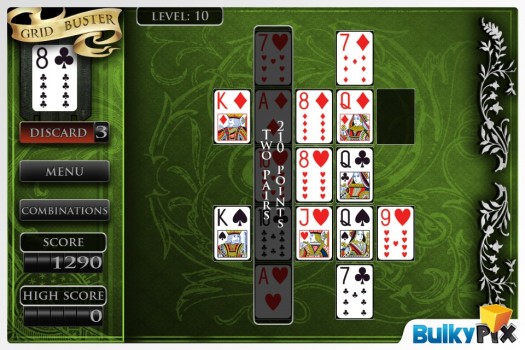 The basic mechanics are the same for all three games: you try to create high-value poker hands by drawing and placing cards one at a time. In the Deck Buster games, you play three hands at a time, and earn extra cards based on the value of the hands you complete, meaning that the better you play, the longer you can continue playing. The only real difference is that Deck Buster 32 is played with a piquet deck (deuces-sixes removed, thus 32 cards), and Deck Buster Wild is played with a full deck (deuces wild). But now Grid Buster… Grid Buster mashes up the Deck Buster mechanics with the crossword puzzle.

Grid Buster is also played with a piquet deck, but with an intersecting layout of rows and columns from 3-5 cards in length. You play until you fill the “grid", and then each row and column is scored (according to the value of the poker hand). The scoring is complicated by the fact that short hands can earn (reduced) points for having as much of a straight, flush, or straight flush as will fit, i.e., a 3-card column with 3 Hearts in it earns points, just not as many points as a “full" flush, and a 5-card row with 3 Hearts and 2 Spades (and no other combinations) earns nothing. Make every hand in the grid a two-of-a-kind or better and there’s a bonus. 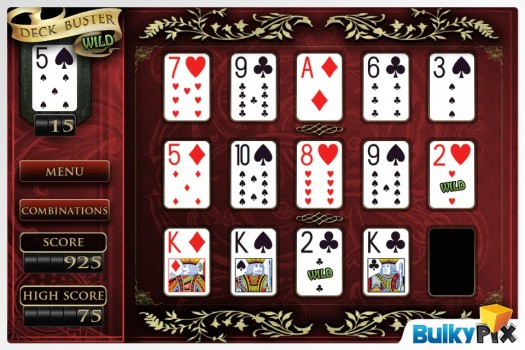 Here’s where your Grandfather’s rider-back Bicycle deck will have a hard time keeping up with Card Buster. You reasonably could play the Deck Buster games with a standard deck of cards and a fair bit of shuffling, but Grid Buster has 50 different layouts for you to play (many with a limited number of discards) and a 1-3 star scoring system with an additional golden horseshoe awarded when you take an unusually good draw and play it really well. The result is that Grid Buster is both more “mobile game-y" and makes each move more strategic than in the Deck Buster variants. The price of this variety and strategy is losing the “play as long as you can" open-endedness of the Deck Buster variants.

If you’re still playing Aidem’s original Deck Buster, or any other Solitaire or Sudoku app, you should give Card Buster a try. Likewise if you’re a Kniza groupie. Otherwise, it’s a matter of what you want to spend a couple of minutes here and there on: Kniza’s games tend to be elegantly simple rather than rule-heavy and complex, but Card Buster is straight-up and uncomplicated even by that standard, and content to be that way.