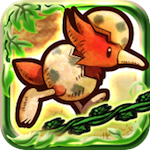 Oh, neat: Ivy the Kiwi (Free) is now a video game that you can play on your iPhone or iPad. The game’s original creator Prope unleashed a touch-friendly version of its perpetual motion game this morning. And from what we’ve seen of it so far, it works just as well on our phone or tablet of choice as it did on its previous platforms, the Wii, Windows Mobile and Nintendo DS.

If you’re in the dark here, Ivy the Kiwi is an auto-runner starring a cute bird. Its core mechanic revolves around vines. In the game, you’ll be tasked with tracking vines on the screen to control how the bird moves and to bridge any gaps that it might come across. On touch, you do this by simply swiping the screen where you see fit.

We’ll have more on this soon, but we’ve got a trailer above if you want to see the game in motion. It’s of note that this is appears to be the downloadable DSiWare version, as it has 50 levels instead of the retail version’s 100, according to Joystiq.