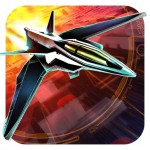 I distinctly remember playing Zaxxon in the arcades, although I’m now a bit shocked to discover it was 1982. What I remember most about Zaxxon isn’t so much its amazing graphics, but rather a vague sense of bewilderment as I tried to wrap my head around its pseudo 3D controls.

This was the first game to introduce isometric graphics, which is how we used to have 3D games before the third dimension was discovered. Zaxxon’s visuals perhaps weren’t so much amazing, actually, as they were clever. Impressively clever, mind you. Whoever figured out a method of fooling our senses so simply was definitely underpaid, no matter what sort of wage they were on.

Now we don’t need anything too clever to give us a 3D-looking game; just a bucket full of polygons, an iPhone and thirty years of game development to deliver Zaxxon Escape ($0.99).

The isometric flight through an outer space obstacle courses is now a fully-3D run through endless tubes, which raises the first and most prominent question about Zaxxon Escape, and I expect  it’s one that the developer Free Range Games knew the iPhone world would be asking: how exactly is this Zaxxon? 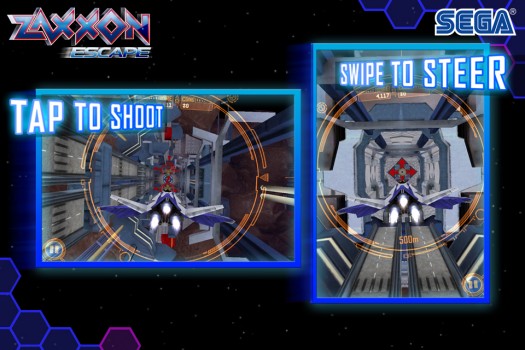 Love the game or loathe it, there’s no denying that it’s genuinely impossible to spot a family resemblance between Zaxxon and Zaxxon Escape. It’s only fair to also pose the question “does it matter?” and the answer really depends on whether you’re a retro purist, a fan of the original or a newcomer to this long-lived franchise. But it’s not unreasonable to expect something that carries the Zaxxon banner to cater, in some way, to those who played the classic coin-op, so it’s off to a bad start for all you (us) old people.

Perhaps the best way to approach Zaxxon Escape is as if it were a brand new game with no arcade legacy. You shouldn’t have to do that, but you’ll be less disappointed if you do. 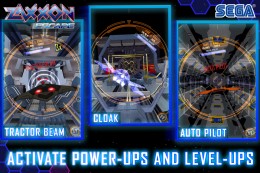 Viewed from behind your fancy new 3D ship, the game shunts you down an endless tunnel filled with trip hazards, coins to collect and sharp turns to navigate. The ship itself uses tilt controls, rotating around the center as you automatically fly in a straight line through the tunnels.

Letterbox openings that you can only fit through when properly aligned are the most common barrier you’ll face, with similar hurdles popping up along your route. The accelerometer controls keep your ship parallel to the ground at all times, which means rotating the entire device around a 360 degree axis to navigate these obstructions.

It’s easy to see what the developer was trying to achieve here, and in some respects it works quite well. Accuracy of your ship’s rotation is easy to accomplish, since you’re effectively lining up the actual iPhone with the gap you’re hurtling toward. On the other hand, you’d better make damn sure you’re playing the game while sat on a bed, or with an array of bean bag safety nets strategically positioned around your feet, as a quick game of Zaxxon Escape is sure to liberate the iPhone from the tyranny of your gaming grasp. 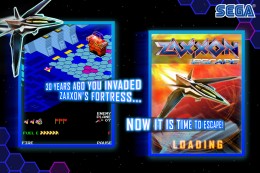 This is doubly true as the game progresses. Your ship speeds up, making the rotations more of an emergency, and right angle bends must be traversed with a swipe across the screen in the direction you want to turn. Again, it’s a very simple mechanic, requiring a quick and dirty flick across the screen when prompted, after which the ship maneuvers automatically. Tapping the screen fires off a shot, which is used to remove full-screen blockages and allow you to continue on your endless run.

Simple controls, sure, but flicking the screen while the iPhone’s dangling upside down from two precarious fingers soon makes the whole thing look like a card trick gone wrong. Glad you set up the bean bags now, eh?

Coins are found floating around in these techno corridors, which are used to buy various upgrades for future games. These power-ups include a temporary auto-pilot (which essentially removes much of the game’s objective and turns it into a spectator sport), score multipliers, automatic coin collectors and so forth. These are the items you’re likely to be able to afford simply from playing Zaxxon Escape, but there are others you’re invited to desire that will probably demand an in-app purchase.

A second life, speed boost and even brand new ships are all on offer. For a price. Consider that about half an hour’s play rendered around 250 credits, yet the cheapest new ship will run up 50,000 credits, so even the most severe OCD sufferer is going to have to open their wallet a second time if they want a new ride. Chances are you simply won’t bother.

And as most every forum poster has pointed out, the complete lack of the original version – either via IAP or as an included incentive – is almost unforgivable. What would it have taken to chuck the retro shooter in? A few kilobytes and quick and dirty emulation? Shame on you, Sega.

So Zaxxon Escape seems to have taken a bit of a kicking here, but it’s not that it’s a thoroughly bad game. In its own right it could have been a decent endless runner, as the visuals are sharp and the concept is sound. Yet it unequivocally fails to earn a place in the Zaxxon canon, and with only one game mode and a greedy in-app store, it struggles to demonstrate its value as a standalone title.