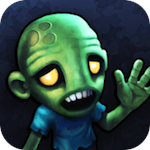 Plight of the Zombie ($0.99) is cool because it turns the whole humans versus zombies thing on its head. In the game, you are something of a zombie overseer, tasked with guiding and otherwise herding a horde of zombies as they munch on the last remnants of mankind. It ramps up pretty slowly, but eventually you’ll be wrangling zombies of all kinds against increasingly well-armed humans. In a way, Plight becomes more stealth than strategy, as you’ll need to sneak attack more humans as opposed to amble up to them.

There’s some neat attrition mechanics, too, but we’ll leave that up to you to discover since, get this, Plight of the Zombies is free at the moment. Once $2.99, Plight is now available for the generous price of zero dollars.

Plight supports most devices, so give it a look if you’ve got the time on your hands. We think you’ll dig it as much as we did.