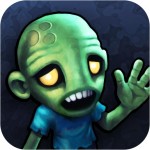 Zombie stories boil down to cat-and-mouse tales, with us human beans unwillingly playing the part of the mice running from all the undead kitties. Plight of the Zombie ($0.99) is a little different. You play as Craig, an average slob who stays home channel-surfing while a zombie apocalypse transpires right outside his window. He decides to venture out for a burger when a zombie shambles in from the side and passes along a severe case of rotting flesh and a healthy appetite for protein. Tragically, Craig can’t roam the city munching on brains by himself, because as any student of popular culture knows, zombies are dumb.

Luckily, Craig has you to guide him. You use your finger to trace a path from Craig to the survivors scattered around the environment. It’s a simple goal in theory and equally simple in practice for the first couple of levels. Steadily, you’ll come up against proactive survivors more interested in filling you with lead than filling your belly. The moment your prey’s survival instinct kicks in, Plight of the Zombie comes into its own as a satisfying puzzle game. 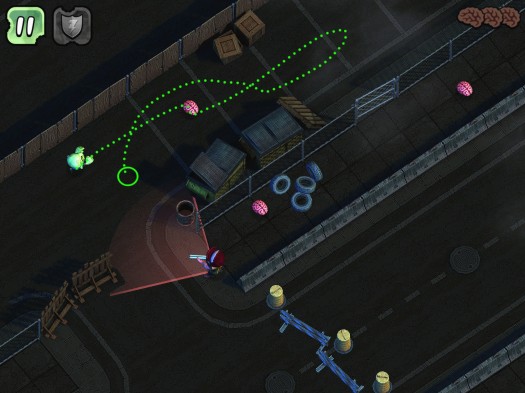 Trace Craig a path and he’ll follow it without hesitation, walking right into the double barrels of shotguns and other nasty weapons en route to his destination. You’ll need to bop him on the head with your finger to make him hit the brakes, wait for the survivor to move on by, then send Craig on his way or re-think your strategy and draw him a new path. Each survivor you gobble up becomes a new undead mouth for you to feed, and the key to passing most later stages. Some survivors wisely hide behind obstacles like road cones and stacks of tires. To get at them, you’ll sometimes need to send a zombie to the front lines, let the survivor waste him, then send another zombie (sometimes more than one) rushing in while your prey reloads.

In addition to humans, each level contains three brains to collect. Collecting brains is optional, but the more you devour, the more coins you earn to purchase content like new levels and attire. New zombie types become available over time. The fat, slow-moving zombies can absorb several rounds of ammunition, making for the perfect distraction while your slimmer, quicker zombies zip around survivors to nab brains. Another type goes invisible while standing stock still, making for covert-ops-like levels where you memorize survivor movement patterns and sneak around while they’ve got their backs turned.

The introduction of these new elements and others such as brains that vanish after a short time and enemies toting different types of guns, thickens Plight‘s already meaty content. Solving many later stages involves lots of forethought, and successfully munching up every survivor plus collecting every coin-packed brain carries ample satisfaction.

There’s not much bad to say about Plight of the Zombie. Zombies boot-scoot along the paths you draw for them as soon as you lift your finger, which means you’ll often hold your finger to the screen waiting for a survivor to turn or move before sending a zombie on its way, and your fat digit makes a better finger than a window. I occasionally had to beat a zombie on the head because the tiny splotch of pixels that makes up his body didn’t register the first tap or the second, and the load times are much slower than your average walker. Lastly, the game might seem steep at three bucks, but you organically unlock new packs of levels as you go, making Plight a more complete experience than most nickel-and-dime iOS games available these days.

None of those marks detract from Plight of the Zombie‘s satisfying and strategic experience that offers a fresh take on the zombie formula. Puzzle fans shouldn’t hesitate to devour this one. (I know: groan. Grrroooaaaannnnn! Like a zombie!)