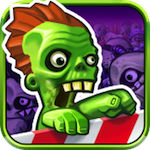 For better or worse, it’s not uncommon to see at least one zombie themed game on our radar during the weekly release cycle. This week sees the launch of Dead Stop ($0.99), the latest from Chillingo and Techland (maker of Dead Island) and the most recent entry into the tower defense genre. While Dead Stop does a great job with its overall presentation and gameplay, an uneven difficulty curve along with a subsequent reliance on premium/IAP currency make the game more frustrating than it needs to be.

Dead Stop puts you in the role of a makeshift assistant to a wild-eyed scientist trying to save humanity from the impending undead invasion. Each mission has the scientist creating various inventions with your task being to put them on the field of play in order to take out the baddies. 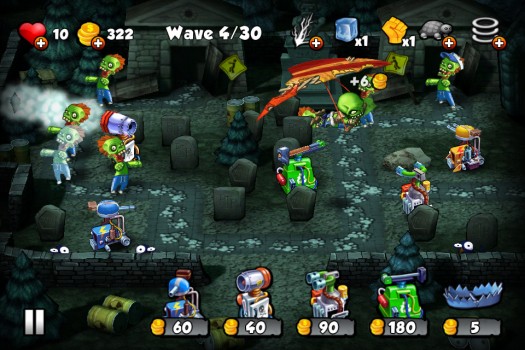 As a tower defense title, Dead Stop stays very close to its roots. Enemies follow specific paths (unlike say, Fieldrunners) with coins awarded with each kill. The towers themselves follow standard archetypes such as the enemy slowing ‘Freezer’ and the sluggishly powerful ‘Sledgehammer.’ Objects littered across the field can also be destroyed in between waves for more coins (and more space to place more towers). In this regard, Dead Stop plays similarly to the classic Creeps (Free), but with a few differences.

One area that Dead Stop does well are its visuals. Eschewing the simplistic graphics of games like Creeps, Dead Stop’s graphics are crisp, colorful and have a bit more depth (most likely due to the change in viewing angle). In addition, Dead Stop does a great job with environment variety, with each level different enough to be a fresh experience. 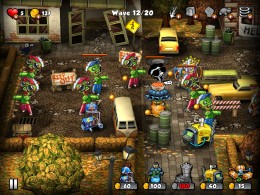 Speaking of variety, Dead Stop occasionally interrupts standard tower defense missions with side missions that offer different objectives and gameplay quirks. While not necessarily a game changer, it goes a long way towards alleviating the tedium that occasionally crops up with tower defense. The same goes for enemy variety, although the lack of a ‘pedia makes it hard to distinguish between the various enemy types.

Another area that Dead Stop expands upon is its power-ups. While players use the standard coin currency for buying and upgrading towers, power-ups require stars, which are earned by completing missions (and rarely picked up on the field). Power-ups range from a controllable lightning bolt that damages and stops enemies, to a turtle that slows all enemies on the field, to even a teleporter that removes takes enemies back to the start of a path.

You’re going to need those power-ups too, as Dead Stop’s difficulty ranges from pretty easy (in the first set of missions) to incredibly difficult. The lack of any difficulty levels also means that you’re stuck with whatever difficulty you find in each mission. The game  casually suggests to use power-ups on the harder levels, but power-ups are rarely found in missions (and disappear after passing a level) and stars are a finite resource. Thus, players focused on finishing the game will most likely resort to IAP in order to purchase enough stars to purchase enough power-ups to complete missions.

This is my biggest issue with Dead Stop. I don’t necessarily mind the availability of IAP or a requisite hard difficulty. However, when both are combined in such a way that most gamers will have to eventually shell out cash just to complete the game, I get a bad taste in my mouth. I feel like the availability of an ‘easy’ difficulty would go a long way towards alleviating my concerns, as it’d allow casual gamers the ability to complete missions without the necessity of power-ups/IAP.

It’s a shame too, because outside of the above issues, Dead Stop is a pretty good tower defense title. The fundamentals are sound, and the game has enough personality to differentiate itself from the pack. I imagine that genre fans that love a challenge should check it out, as the last two-thirds of the game offer enough difficulty to keep any veteran happy. For everyone else, be prepared to stockpile the stars (and power-ups) in order to really ‘enjoy’ what the game has to offer.