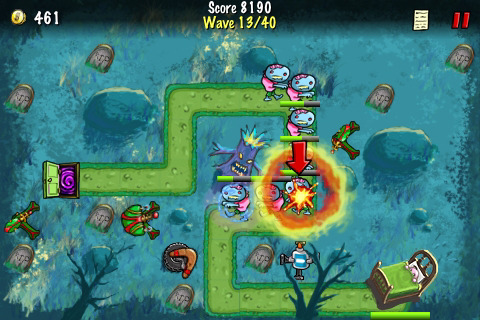 The latest Tower Defense entry into the App Store comes from Super Squawk Software in the form of The Creeps! [App Store].

The Creeps! is certainly worth a look for those who enjoyed Fieldrunners. Unlike Fieldrunners, this new game offers predefined maps (rather than an empty field) on which you build your defenses. The game comes with 10 different stages which are actually five distinct maps split into a traditional and “unlimited" modes. The traditional mode offers a set number of “waves" of Creeps that try to make their way through your defenses, while the unlimited offers just that.

The game adds a number of nice touches that introduce new dimensions to the genre. For example, many of the best map locations are occupied by physical objects (trees, gravestones). Like the Creeps themselves, these objects can also be destroyed by targeting your firepower against them. This, however, takes time and resources away from fighting the actual enemies, so compromises have to be made. As levels progress, new towers are introduced and one actually requires the use of the accelerometer to deploy.

The game is surprisingly challenging with difficulty ramping up at each level.

With the sheer number of Tower Defense games on the iPhone, there’s always a constant debate about which is the “best". While some may prefer a game with more depth such as 7 Cities, The Creeps! offers a less tangible “fun" factor that we also found in Fieldrunners. The Creeps! is being offered for an introductory price of $1.99 (normally $4.99) over the holidays. Unfortunately, the game does not include any sound effects in this version.

This gameplay video shows how the game looks, though does not demonstrate the targeting of physical objects. Note: it was just recorded for the purpose of showing the game, rather than to demonstrate a sensible TD strategy.