If I tell you that Lili ($0.99) is a game about picking flowers, please don’t stop reading. It’s also about being a freedom fighter, if that helps, and bringing down an authoritarian regime. Hope that sounds good, because it is—fantastic, even. The plucky star of the game traipses through the gorgeous world of Geos, stalking Spirits, clawing her way up their backs and tearing out their flowers until they have nothing left. They can get pretty cross about that, but it’s the friendliest sort of guerrilla warfare.

The things that are wrong with Lili—and there are a few—have a hard time stacking up against the game’s beauty. The environments are lush, painted with bright colors and full of detail. There is as much repetition in the streets and homes as you might expect, but there are hints of personality to be found tucked away in quiet corners. Every home you poke your nose into has treasure to be found, and the quirky things you collect add a heck of a lot of character to an already charming title. 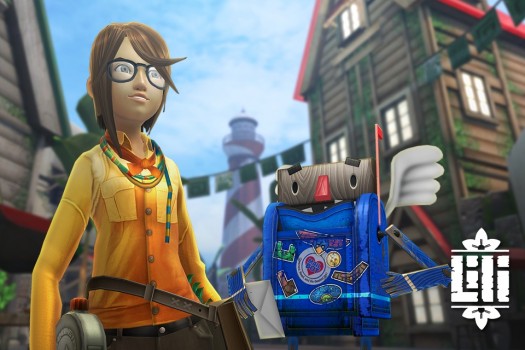 The controls are surprisingly excellent. I don’t spend a lot of time playing 3D adventure games on iOS, and clunky controls are pretty much always why. Lili handles the touch exploration dilemma brilliantly, though. You tap to start walking, double-tap to run. That sets Lili (the girl) running straight forward, and you drag the camera behind her to point her where you want to go. It’s sometimes a bit too easy to steer yourself into a corner, but it works very well most of the time.

One of the reasons it works so well is that Lili is not a game of quick reflexes, at least not while you’re exploring. You don’t need to do a lot of dodging or changing direction. It’s only when the game tries to get into your way that the ride gets bumpy. There are two Spirits you can’t fight, who hang out only to run you down when you get close to them. More than once I found myself cornered and stuck, bashed over and over. Fun. And even when they’re working well these blockades add little to the experience—it can be confusing enough to navigate the world without getting bounced back and forth. 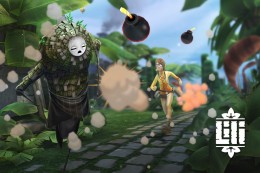 The game’s other big issue is that things tend to go missing. Often it’s the sound effects—and while the soundtrack is gorgeous, it doesn’t play as well when it’s all you can hear. Less often it’s the interface, which is a quit-and-reload sort of issue. And more and more as the game approaches its ending, it’s the whole shebang. It’s obvious Lili needs the resources it uses, but knowing that doesn’t make crashing any better. Oh, and fair warning? It might let you download the game, but your 4th gen Touch isn’t currently supported.

But when you pit most of that against the good stuff, it’s hard to complain. I’m particularly fond of the writing. I love the casual, off-the-cuff tone of the game. Lili reacts naturally to the situation unfolding around her, pulling off a decent impression of how people might actually act. Surprisingly rare. The quips are clever, and the darker parts are as dry as you could hope for. And this game does delve into darkness. While it keeps the flower picking nonviolent (I mean, really, you’re taking their soul flowers—there’s subtext there), the tale is one of a subjugated people who are being quite literally crushed by their opressors. Lili doesn’t shy away from its dark side. 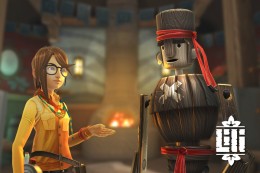 Stripping away all of that, though, Lili is a simple game. You chase down spirits and hop on their backs. You tear out their flowers, toss away bombs and avoid thorns in a swipey mess of aggression. Every so often you level up and get better at sneaking, chasing or hanging on to the Spirits, and the cash you collect goes to improving those skills. You also buy power-ups that help you sneak or run, or clear a Spirit of its defenses. It’s only barely an RPG from a mechanics point of view, but you take on quite a role.

The Spirits’ defenses are a problem. As long as you keep up with your upgrades and do plenty of exploring, you should be able to afford to keep your gear up to date and have plenty of power-ups to spare. This works out right up until the final quarter of the game, but the last bunch of Spirits are nasty. Pluck one flower and they’ll spawn a field of bombs you need to frantically pull before they explode. Then they’ll do it again, repeating that pattern all the way through the dozen-odd flowers you need to pluck. It gets ludicrous, and sometimes the only solution is to toss power-ups at the problem until it resolves itself. The issue hits when you can’t afford to buy any more, because Lili is happy to sell you extra coins. See where negative sentiment might start to slip in?

It’s a small misstep, but it would have been nice if a game of this quality could have avoided adding to the tally of games that could have been better if not for their IAP. You can grind your way through smashing pots and picking flowers until you can afford more bombs, but it’s so much easier not to. You’re best off by far if you put down the money for the coin doubler as soon as you can, and that’s a silly situation to stick a player in.

Grumbling aside, though, it’s hard not to love Lili. Like the character, the game can be obnoxious at times. But it’s so pretty, so well-written, so cleverly designed on the whole that complaining feels a lot like nitpicking. There are problems, and hopefully they’ll be resolved. But how many games do we have that are this ambitious and come together this well? A handful, maybe? Bitmonster has joined elite company here, and should be applauded for doing so with such an original, charming game. Lili is lovely. Spend a few hours exploring the island of Geos, hunting down its spirits, and collecting each and every one of its secrets. It’s a journey worth taking.