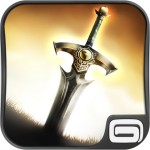 We’ve been keeping tabs on Wild Blood ($6.99) every since Gameloft announced that they would be utilizing Unreal Engine 3 in their iOS games. Being one of the games taking advantage of that engine, there’s little doubt that Wild Blood is a nice looking game. However, an uneven difficulty curve, control issues, and a few other technical missteps keep this adventure from reaching the lofty heights of the tale it’s based on.

While Wild Blood takes its cues straight from the Arthurian legend, it’s story is mostly its own interpretation of the tale. In it, you play as Lancelot, one of the Knights of the Round Table. After catching Lancelot having an affair with Arthur’s wife, Guinevere, Arthur ends up distraught and gives carte blanche to his sorceress, Morgana, to open the Hell Gate, unleashing a host of demons onto the land. Thus, Lancelot’s tale is to recruit allies (including familiar faces such as Merlin the Wizard), rid the world of demons and take down Arthur and Morgana. There’s something about playing a game set within Arthurian times that simply makes it more intriguing. Thus, while Wild Blood’s story isn’t particularly exciting, it at least has more meat to its backdrop, more so than many other games. 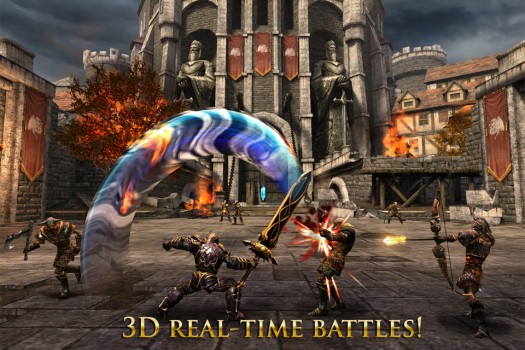 Meanwhile, Lancelot will hunt Morgana and her demons via standard hack ‘n’ slash gameplay. A virtual stick controls movement while a variety of virtual buttons allow Lancelot to slash, dodge, dash and launch a variety of weapon-related spells. Lancelot also eventually discovers a bow and dual weapons for ranged and fast attacks, respectively. A fully manipulative camera system lets you swipe the screen to view the world. Finally, a loose auto-targeting system rounds out the controls. 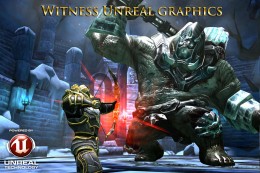 Wild Blood’s controls mostly works, with some key exceptions. Attacks and movement are adequate for playing, although I’m not the biggest fan of using a virtual stick for movement (it feels too much like a ported game than a native iOS game). However, the camera controls just don’t work for me. Swiping to move the camera is too slow (forcing you to swipe more than you need to move the camera) and there’s no option to adjust the sensitivity. When you’re caught in the middle of battling enemies, there’s not a lot of time do things like adjust the camera. Yet, Wild Blood forces you to focus too much on the camera, and it ends up frustrating.

Thankfully, not all aspects of Wild Blood are frustrating, as the game features a nice current/skill upgrade system that allows tons of customization. There are tons of stats available for improvement, with upgrades available for damage, critical rating, techniques, and spells. These stats are separate for each weapon, giving you three separate sets of improvements to work towards, in addition to general ‘armor’ attributes (health, speed, e.t.c.). While this leads to a large amount of variety as to character development, one of the possible pitfalls becomes spreading your gold too thin across a variety of upgrades, especially with the uneven difficulty curve as you progress. 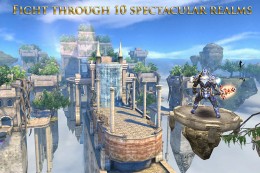 While the first half of Wild Blood feels pretty balanced, you quickly learn that there’s an uneven difficulty curve, especially towards the latter third of the game. Bosses become particularly tough, with stats being heightened significantly. While this would seem obvious, the biggest issue is that your own stats don’t seem to increase at the same proportion. This is where the game seems to lead you down the primrose path of IAP in order to buy more gold to increase your stats. I understand that this seems to be a recurring theme in games lately, but having IAP pushed in this regard in a game of this caliber just feels wrong.

If single player (or dealing with the issues above) isn’t your forte, Wild Blood includes a multiplayer mode that has you taking Lancelot against other Lancelots (and other characters, of course). There are multiple game modes, such as Team Deathmatch, a ranking system with complete stat tracking, and a decent match filtering system. However, the gameplay itself just feels bland. The rankings don’t seem to offer much incentive to keep playing, while the control issues I mentioned above still apply, except with the added issue of latency. Sure, it’s an alternative to single player, but not that good of an alternative.

Seeing how it uses Unreal Engine 3, you’d expect Wild Blood to look awesome and in that regard, it certainly succeeds. Wild Blood has some very beautiful graphics, with good particle effects, detailed textures, and nice fantastical backdrops. I spent most of of my play-through on the Retina iPad and it was a visual treat. Unfortunately, even this aspect of Wild Blood isn’t perfect, as I encountered numerous occasions of frame-rate slow-down.

This seems to be the perpetual theme of Wild Blood: every positive seems to be counter-balanced by an unnecessary negative. The controls, story, gameplay — even the visual engine itself, all seem to work against the elements that Gameloft do succeed in implementing. It’s a shame because Wild Blood has the potential to be a must-have iOS title. Unfortunately, as it stands now, it’s a mixed bag.