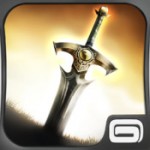 So, Wild Blood is finally coming out. The 3D, character action game should see a release later tonight, as the app slowly worms its way around the world. In our hour or so with it, we’ve noticed that it doesn’t have any shocking mechanics or systems. It’s a pretty straight-forward brawler filled with tons of demonic fodder to brutalize, broken cities, and bosses to fight. But, it is an original game — a notable quality since its creator Gameloft rarely stretches its creative legs.

In the game, you control a bizarro version of Lancelot who journeys to a Camelot that is being besieged by demons. As Lancelot, you’ll be tasked with destroying these demons and saving people from the attack.

Functionally, Wild Blood is a simple hack-and-slash affair with a focus on combo and one-on-one mechanics and systems. Quick taps on the normal attack activate a three hit combo. Later, you’ll be able to roll in evade and magic abilities that build even bigger combos, allowing you to “juggle" enemies that pop out from all over the fighting area, including behind your character.

Being able to prioritize foes like, say, archers that spawn from behind, is a big deal. Because Lancelot doesn’t seem like he’s the King of Crowd Control, so is staying out of situations where you might get surrounded. To this end, Wild Blood has a glide mechanic and a sharp auto-lock system, which lets you evade but roll right back into a foe from a surprising amount of distance. Getting the feel of this is kinda rough at first.

Situational awareness and then identification of the biggest threats is sorta what Wild Blood is all about. Investigating the broken fantasy world of Camelot isn’t. Each level is broken into corridors that are gated by demon doors that only disappear if you kill every monster in the area — a simple enough task, for the most part, since these areas are really more like mini-arenas than any other sort of complex level construct.

As you defeat enemies, gold sprays from their bodies. You can use this gold to buy skins for your weapons and armor, buy potions or upgrade aspects of your sword, jacking up its damage, quickness or even special abilities, like fire damage. Later in the game, you’ll get access to a heavier weapon and bow. These can be upgraded, too — via in-game coin, or if you’d like, a real money exchange for in-game coin.

Anyway, what’s interesting about Wild Blood is that you can’t call it a rip-off. Sure, its systems and mechanics are immediately familiar and done to death in a billion other games, but it’s not an homage to a popular video game. This is an important aspect, we think, and it’ll be interesting to see if Gameloft continues doing its own thing moving forward with its future Unreal Engine 3 games.

Wild Blood should appear tonight. We’ll have more later, including something on its online component.