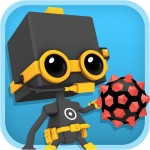 In case you haven’t noticed, we’ve been fans of the titles coming out of Illusion Labs for quite awhile. So when the developer announced Blast-A-Way ($4.99) early last month, we were intrigued and a little excited to see how Illusion Labs would put its mark on the puzzle genre. Well, as a physics puzzler, Blast-A-Way doesn’t stray too far from normal genre conventions. However, the game’s strict attention to detail, excellent implementation of features and simply fun gameplay set Blast-A-Way apart from the pack, earning a recommendation in my book.

After causing the dangerous Sticky Bomb Monument to fall and explode, a group of little beings called ‘Boxies’ are blown across the lands. Thus, you take the role of three robot heroes as they traverse across a variety of regions in search of the Boxies. Blast-A-Way features 80 levels across five regions, each tailored after a different “element" (wood, metal, fabric, stone and plastic). Each level tasks you with finding three Boxies and guiding your robots to the exit. There are no timers, scores, or points; the only ways to gauge progression are the amount of Boxies you’ve rescued and the amount of levels you’ve unlocked. In this sense, Blast-A-Way takes a page from simpler puzzle games, but there is definitely some beauty in this simplicity. 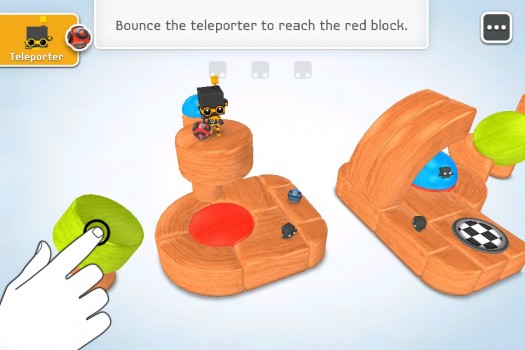 As you can imagine, at its core Blast-A-Way is a game about bombs. Scattered across each level are colored blocks that can be destroyed with like-colored bombs. Where Blast-A-Way excels is in the sheer amount of different bombs you can use. Standard explosives come in impact and sticky varieties while the “Sponge" is a bomb that takes the color of the first block it hits.

Meanwhile, utility bombs such as the teleporter and rebuilder will transport you and rebuild broken blocks, respectively. Finally, color changing windows are occasionally found in levels and can dynamically change the color of any bomb thrown through it. Later levels introduce pipes and movable blocks, which up the ante for timing and angle for throwing bombs. While the sheer variety of elements may sound overwhelming in prose, Illusion Labs does an amazing job of introducing and guiding players in practice. I never felt lost within a level, and every element just made sense whenever I saw it in a mission. Too many puzzle games fail the balancing test between difficulty and playability, but Blast-A-Way hits that medium easily.

Adding to the beauty of Blast-A-Way are its impressive visuals, which continue the tradition of quality graphics in Illusion Labs games. Each world features meticulously detailed textures that do a great job matching the themes of each region. Explosions look nice and feel impactful, robots move with decent animation, and the game exudes a pleasant, vibrant mood that I think fits the vibe found in the rest of the game. Visuals aren’t necessarily at the top of the priority list with puzzle games, but it just goes to show  the thoroughness of the attention to detail that Illusion Labs offers.

One area that warrants some complaint is Blast-A-Way’s controls. Since the game takes place in a fully 3D environment, you can rotate, zoom in/out, and and raise/lower the altitude of the camera. Unfortunately, the controls for those camera movements just aren’t as intuitive as I’d like. For that matter, I wasn’t the biggest fan of the line-drawing scheme for moving your robots, although it’s better than a virtual control-pad.

Relatedly, aiming your bombs is another area that can be hit or miss. To aim, you tap and hold on the targeted area. Holding down on the target allows you to set the trajectory of the throw. For some reason, I had numerous situations where I’d aim at the same location with the same trajectory and my robot’s throws would vary widely. Obviously there are physics at play so not every throw ends up exactly the same, but it was still somewhat surprising and an annoyance.

Still, I’d classify the above complaints as nuisances more than anything else. Blast-A-Way is still an excellent physics puzzle that offers enough content and strategy to keep any genre fan happy and content. It also doesn’t hurt that it looks beautiful, as well. While Illusion Labs doesn’t particularly offer anything innovative, Blast-a-Way proves that there is still room in the overcrowded puzzle arena for games that excel in pure execution.