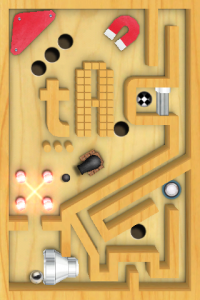 From the very beginnings of games on the iPhone, back even before the App Store even existed, it has seemed like labyrinth games were a natural fit for the tilt controls of the device. There are too many games to list that share the core gameplay element of rolling a ball around a maze, and before playing Labyrinth 2 [App Store] I thought there was little room to innovate on such a crowded genre with seemingly endless variations on the same basic game. Illusion Labs has proven me wrong, as Labyrinth 2 is absolutely fantastic

From our detailed preview of the game:

Like the original game, the goal of Labyrinth 2 is to get the silver ball from the starting point to the goal while navigating walls and avoiding the holes. In the first version, that was pretty much all there was to it. Labyrinth 2, however, adds a number of new elements that graduate the game from simple wooden toy simulator to arcade game.

These elements include cannons, bumpers, doors/switches, magnets, fans, resizers, merry-go-round, duplicators, lasers and more. Navigating the levels still require careful tilt control to avoid falling to your death, but are also more puzzle/goal driven as you must also figure out how to make it to the exit. Levels are timed as before so beating your individual high scores remains the motivator to play a level again. This time, however, they’ve added a ghost ball representation of your best time for you to directly compete against.

My favorite part of Labyrinth 2 is the online level editor, available at levelpack.com where players can create their own levels which are then downloaded in game. The few included levels themselves are good, but pale in comparison to what the community has already created. In my time with the game I’ve really enjoyed myself going online each day and downloading the new level packs that other players have created. (Forum member MidianGTX has even started a thread for discussing level creation on our forum, as well as creating the Touch Arcade level seen above.)

The creativity so far has been astounding, and now that the game is out in the wild I can’t wait to see what the player base comes up with. If you’ve enjoyed labyrinth games in the past, Labyrinth 2 is a must-own. If you want to sample some of the great things in Labyrinth 2, as we posted previously, you can play 5 levels from the sequel in the recently updated original Labyrinth [$2.99] and Labyrinth Lite [Free].

Update: App is back.